Could Monday’s quake trigger a sleeper tsunami or an Alpine Fault quake? Are we living in an era of quakes? Science reporter Jamie Morton tackles five big questions facing scientists.

1. Has the quake increased the chance of a sleeper tsunami?

One potentially increased threat is a rapid-fire tsunami from the submarine Kaikoura Canyon – which recent modelling has shown is capable of generating a wave with a crest 13m above sea level.

The huge canyon comes up to within 500m of the coast south of Kaikoura and feeds sediment into the 1500km-long Hikurangi Channel that runs east of New Zealand.

It posed a unique threat due its combination of factors, including very shallow water next to the canyon edge; steep slopes of the canyon which drops off down to 1000m; large areas where there might be weak sediment; large earthquake sources nearby; and all of it very close to the highway and populated areas.

In 2006, scientists from the National Institute of Water and Atmosphere (Niwa) said that a possibly severe tsunami off the Kaikoura coast could be triggered by either a submarine earthquake, or underwater landslides that occurred at the canyon’s head every 200 years on average.

Niwa marine geologist Dr Joshu Mountjoy, who has assessed the threat over recent years, told the Herald this morning it was unclear what Monday’s 7.5 earthquake could have meant for the canyon’s stability.

“One of the faults most likely ruptured right through the head of the canyon, so there’ll be plenty to see there.”

Mountjoy said there was yet no indication of a landslide-generated tsunami, and if one had occurred, the coast being uplifted by a metre would have mitigated the tsunami’s run-up on land.

“But it’s highly likely that the canyon rim is less stable now than it was before the earthquake, due to shaking,” he said.

“We’d expect to it to precondition the slopes for failure, so it’s possible failure could happen in an aftershock, and certainly suggests people should stay away from the coast.”

A landslide-generated tsunami in the area could occur at very little notice. 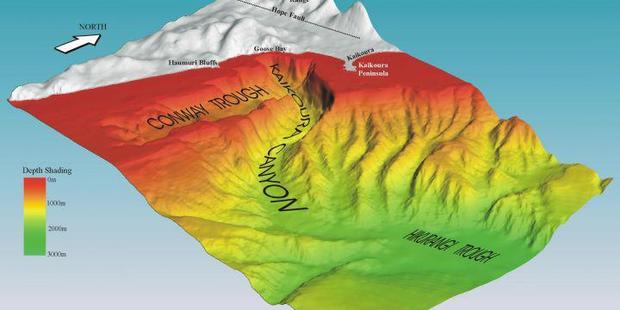 “You could have a scenario there where it’s all cracked quite a bit … and it doesn’t take too much more and it might reach the threshold we think of as our natural warning, which is a minute or more of a really vigorous shake.

“But now it might be something we could consider slightly below that threshold.”

The immediate hazard covered a stretch of the coast between the Kaikoura Peninsula and Oaro – a section that remained blocked off.

“But of course, people live in places like Goose Bay,” he said.

Mountjoy was now discussing with colleagues whether an urgent assessment of the canyon’s stability was needed.

“We have been through many aftershocks already, and nothing has been reported – but I don’t think there’s any field teams on the ground at the moment, so exactly what has happened is unclear.”

The risk of a similar threat facing Wellington from underwater landslides in the aftermath of the quake was less likely.

2. Has it increased the chance of an Alpine Fault quake?

There have been many questions over whether the quake stirred the “sleeping giant” that is arguably our biggest earthquake threat, the Alpine Fault.

This vast system, running along the spine of the South Island, is likely to cause a major quake within this generation’s lifetime.

According to GNS Science, this rupture would produce one of the biggest earthquakes since European settlement of New Zealand, and would have a “major impact” on the lives of many people.

Could Monday’s quake have increased the risk?

“You’d think with the Christchurch quakes, and this one, that it would have set that fault off by now.”

But there was still much that remained unclear about the drivers of a potential Alpine Fault quake.

One approach scientists could use was modelling Coulomb stress transfer, where stress from one system could be pushed to another.

But Stern pointed out that many faults were typically stressed to critical points anyway.

Otago University geologist Dr Virginia Toy suspected the chances of an effect on the Alpine Fault were marginal.

GNS Science geodynamic modeller Dr Charles Williams said some Coulomb stress modelling had been undertaken following the quake, but this had so far only looked at the Wellington and Wairarapa faults.

“The other problem we have right now is we know so little about the slip that occurred in the earthquake that it would be hard to do a very accurate Coulomb model right now,” he said.

“You wouldn’t want to say too much at this point.”

3. What can the Kaikoura Earthquake tell us?

So far, we know the 7.5 quake that struck near Culverden just after midnight yesterday was dynamic, complex and involved multiple faults.

With aerial observations and field reconnaissance, GNS Science scientists have been able to observe many surface ruptures around the Marlborough Fault System.

“The faults where we’ve seen those ruptures are the Kekerengu Fault near the coast, the Hope Fault, where there has been some minor movement, and the Hundalee Fault,” GNS Science seismologist Dr Natalie Balfour said.

The quake had also revealed a previously unknown fault near Waipapa Bay.

It appeared the initial quake had caused stress to jump from one fault to another, causing a multiple quakes that lasted a combined two minutes – the most severe lasting 50 seconds.

One of the quakes appeared to have been driven by “strike slip” faulting, while the other one was “thrust” faulting – a type of reverse faulting observed in the February 22, 2011, Christchurch Earthquake.

“This is obviously all part of the Marlborough Fault System, which is quite a complex system of faults, so in [regard to the earthquake], it’s not a surprise.”

GNS seismologists would now be measuring surface cracks in the ground to calculate distances by which different faults had shifted.

What was recorded on the ground would also be compared with data captured from satellites, with more insights to be gathered by GeoNet monitoring equipment set to be deployed around the region.

“What a lot of the scientists are trying to find out is how much movement basically was on each of these faults,” Balfour said.

“And hopefully this will better inform our models as well, although most of our forecasts are based on statistics.”

“The thing that interests us the most is how the subduction zone beneath that area works its way into the strike slip system, and then into the Alpine Fault system,” he said.

“There’s some sort of process or structural dynamic, which goes from a classic subduction zone in the Wellington area and Marlborough, and then it migrates and morphs into the Marlborough strike-slip faults, and then finally into the Alpine Fault.

“And we are always intrigued in a three-dimensional sense of how, mechanically, does this work?”

4. Are we in an earthquake period, or is it just co-incidence?

“New Zealand is a very seismically active country and it seems at the moment that we are going through a period of quite a lot of large earthquakes,” Balfour said.

“The last time we had a series of large earthquakes in New Zealand was around the 1950s – it seems we’ve just had the East Cape, and we’ve had Christchurch, and now this.”

But because of the sheer complexity of these sequences, and each individual quake, it was difficult to draw straight lines between an event such as the 7.8 2009 Dusky Sound quake – our biggest in recent times – and Monday’s 7.5 event.

Stern said his colleagues had been able to create “pairings” of big quakes that were suspected to be related.

These included those that struck Marlborough and Wairarapa in 1848 and 1855; the Arthur’s Pass and Murchison quakes in 1929; the 1931 Napier Earthquake and the 1932 Wairoa Earthquake; the 2010 Darfield and 2011 Christchurch quakes; and the Cook Strait and Lake Grassmere quakes in 2013.

“So we do see pairings of big quakes, and in a year’s time, we could still expect another one, I guess, given our record,” Stern said.

“But that’s all we’ve got to go on: this is what we are hamstrung by, it’s not like forecasting the weather, where you’ve got gazillions of systems to model on – we’ve only got a cycle which lasts 140 years, and it’s just not long enough to see any patterns that are stable.”

Stern suspected that such sequences weren’t just exclusive to New Zealand – larger trends and patterns could be worked out when looking at earthquake occurrence across the rest of the globe.

5. How accurate are the aftershock probabilities?

There were more than 800 aftershocks recorded yesterday and overnight, most of them just east of Seddon and some also close to the centre of Kaikoura.

A trio of “severe” quakes were also recorded last night, reaching a magnitude 5.8.
Most earthquake aftershock sequences decay over time, with spikes of activity and occasional larger earthquakes.

GeoNet has issued aftershock probabilities that describe the likely progression of the sequence over the coming months.

There are very different probabilities for each scenario.

Scientists have developed three scenarios based on what they know so far, but they add that their understanding is evolving as they do more analysis and receive more data.

Balfour said the probabilities that had been put out so far had generally been in line with what had been observed.

Over the next 30 days, there was an almost certain probability of many quakes ranging between 5.0 and and 5.9 and 6.0 and 6.9, although the probability of another quake of over 7.0 was much smaller.

“There is still a very likely probability of a magnitude 6.0 to 6.9 quake – so that’s fairly high, and it’s likely this would cause some strong shaking as well.”

But Balfour said vigilance was still the best approach.

“The thing to always have in the back of your mind when read these probabilities and these scenarios is that we do need to be prepared,” she said.

“If there’s anything that what’s happened since 2009 has taught us, we need to be prepared, we need to know what to do in a quake, and we need to have a lot of food, water and other supplies.”