A stream of bubbles rising out of the sea around the Kaikoura peninsula is “just a little magical silver lining to the severe event that’s occurred”, a scientist says.

Matthew Hughes, a geohazards, risk and resilience lecturer at the University of Canterbury, went out this morning to have a look at the 100m stretch of bubbles in Whaler’s Bay that started after last week’s 7.8 magnitude earthquake.

Hughes believes the bubbles are caused by newly formed cracks in the seabed releasing gases into the water.

The bubbles were discovered by Conner Stapley and his boss Matt Foy, who owns Kaikoura Kayaks.

“We were going for a paddle . . . just to have a look at the coastline and suss out our paddle routes, just to see what was happening out there,” Foy said.

“We spotted these bubbles coming up from the bottom of the ocean floor.”

Foy said it was as if “someone had turned on the spa pool underneath the water”.

Stapley dubbed the area Hope Springs, and Foy said there were three reasons for the name.

The first was to name it after Stapley’s 9-year-old daughter. The second reason was because the suspected cracks may have been caused by the Hope Fault.

The third reason was because the bubbles signalled “hope for the town”.

“We’ve got a new attraction out here,” he said.

Foy said there was a sulphurous smell around the area and the water directly in the bubbles was warmer than the surrounding sea.

Stapley said their discovery was “a little bit unnerving” at first. 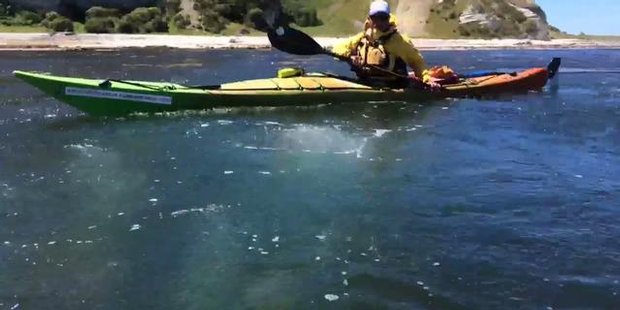 “It brings back some of those memories of those 90s volcano movies.”

So far the stream of bubbles appears to have remained constant since the pair discovered it on Monday.

Foy hoped people would come to see it once they could get into Kaikoura.

Hughes believed he was the first scientist to view the bubbles.

“What I think is causing that is gas being released from the rock layers underneath. I’m not sure what the gas is, it needs to be analysed, but it’s probably going to be carbon dioxide.”

“We have no idea how long this phenomenon will last,” he said.

Hughes didn’t suspect the gases released would be harmful as they were not in high enough concentrations.

“Having said that, a couple of the kayak guides did notice some dead wildlife, but we can’t say that’s related to this phenomenon.

“It’s early days and we need to do some research.”

Hughes wanted to remind people tour operators were still open for business in Kaikoura, and people “wanting a bit of adventure” should experience the tourism in the area.