In 2015, the internet gave birth to “Netflix and Chill” and the revelation that any misfortune – no matter how minute – calls for a healthy dose of Michael Jordan tears.

Memes continued to reign supreme in 2016, but with a somewhat newsier twist. After all, it’s not every year America sees a presidential election, the Olympics and a Gilmore Girls remake.

Here are 10 of the biggest meme themes of the year.

The World Wide Web sees some of its brightest and darkest moments during presidential election years (RIP, legitimate news), but you can’t argue that they don’t make for great meme-age. Between Trump’s hair and Hillary Clinton’s inbox, political memes were ripe for the picking.

America’s “uncle-in-chief” – as the interwebs dubbed him – was arguably the biggest thing to happen to memes since Drake’s Hotline Bling music video. As the election progressed, Biden memes came in hot, painting him as Obama’s fun-loving, practical jokester BFF (complete with friendship bracelets).

Who knew that a piece of fried chicken could look so much like a labradoodle puppy? Or that sloths so closely resemble croissants? Or that the Chihuahua-blueberry muffin likeness is uncanny. Who cares, the world is a better place for it.

​When the current meme generation is old and gray, they’ll look back fondly on 2016 as the year they decided to stay at home, binge watch Netflix, hibernate and generally be as antisocial as possible. The Gilmore Girls reboot surely did not help this year’s social scene. 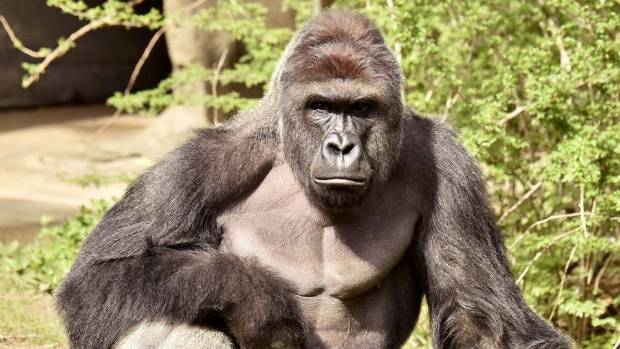 Harambe, a 17-year-old gorilla, became the subject of one of the most popular memes of 2016.

First the internet was furious about the Cincinnati Zoo’s decision to shoot Harambe – a 17-year-old male gorilla – after a boy fell into his enclosure. Then they spent a few days calling for the boy’s mother to be arrested and charged with child endangerment. And on the seventh day, they made memes.

Originating from the 2014 Muppets Most Wanted film, Evil Kermit is 2016’s version of having a devil on one shoulder, an angel on the other. The formula follows your standard internal struggle, except with more dogs and shopping.

McKayla Maroney’s “unimpressed” smirk is so 2012. While Michael Phelps listened to Future and unleashed the death stare to end all death stares at the Summer Olympics, America watched on in horror … and then promptly turned him into a meme.

While perhaps most relevant to anyone who works with stock art on a daily basis, everyone can get a chuckle out of a sarcastic caption pasted below an impossibly clean-cut guy at a desk. Most stock art memes target job interviews, hating your job, quitting your job or being generally jobless.

Memes mocking the sheer ridiculousness of 2016 (mostly election-related, if we’re being honest) is the internet’s way of laughing at itself. Here’s to the madness that was this year and the many memes that got us through. RIP, 2016.