Queenstown has long had world class ski resorts and it now has the world’s largest indoor dry slope terrain park.

Over $500,000 and 600sq m indoor terrain park PowderPak in Frankton, has a view of the Remarkables, but that is as close as it gets to real snow.

However, just like the Remarkables ski field it features jumps, rails and an inflatable air-bag for skiers and snowboarders. 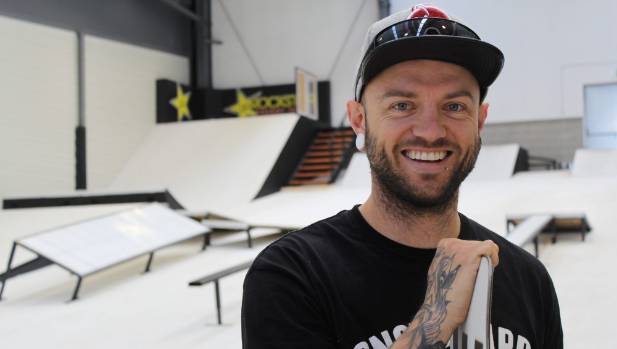 Originally from Adelaide, Shane Longmans, who started the business with Shaun Leathley, said Queenstown athletes needed the indoors facility to practice all year round or when the mountains were closed.

“The weather here is so unpredictable. On grey, bad weather days you can just come in here. All the skiers and snowboarders are here in town,” Longmans said.

As a keen snowboarder, he did not like bad weather days, he said.

The business, which opened three weeks ago, is larger than any other similar indoor dry slop terrain park in the world. The second largest is in Canada and is about 480sq m.

Longmans and Leathley have backgrounds in welding and carpentry so designed and built the park themselves.

They imported the dry slope synthetic snow surface from the United States.

“It’s good to see it how it is and people are absolutely stoked,” Longmans said.

The white surface, which looks like a carpet, gets conditioned with water and dishwashing liquid to keep the slopes slippery.

To soften up the landings and falls, the slope has a 40cm underlay of foam.

“We’ve done everything that we can to prevent injuries. The amount of injuries we have had from people falling over has been absolutely minimal,” Longmans said.

On the 25m slope with two 4m jumps and a 7m jump the owner is aiming to bring skiing and snowboarding together.

The park would be a training, learning and a competition ground for combined disciplines, Longmans said.

“We are in talks with the Remarkables and they are keen to come on board with some comps,” he said.

“We’ve had one guy in just shorts with no top, but generally we are trying to recommend to wear some sort of clothing,” Longmans laughed.

Park’s manager Dan Harris said on a hot day an 80 minute session on the dry slopes could be “quite a workout”.

The park is open all year round from 9.30am to 9.30pm with rentals and season passes available.