A teenage driver had to be pulled from the wreck of a horrific car crash in which three young people died in Canterbury.

This was one of six crashes on Boxing Day which brought the road toll to nine over the Christmas period.

The official holiday road toll count runs from 4pm on Friday December 23 to Wednesday January 4, and already the toll is more than half of last year’s total.

Police say they are disappointed with the dangerous driving they have seen over the past few days, particularly after a person was caught blowing six times over the legal breath alcohol limit on Christmas Day.

They are urging people to take care on the roads, and to take their time getting to their destinations 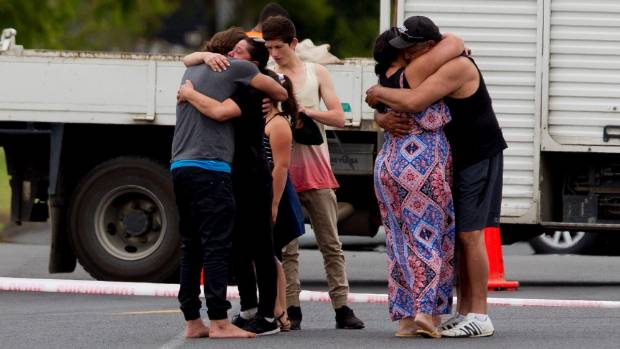 A major crash killed three teenagers and injured two other people in Leeston, 40 kilometres south of Christchurch, in the early hours of Monday morning.

A member of the public rang police about 2.20am after coming across a car that had rolled near the corner of Harts Road and Southbridge Sedgemere Road.

Two men and a woman were dead at the scene and two others were taken to hospital, one with serious injuries.

Clifford Irving, 66, from Lower Hutt, died following a collision between a motorcycle and a ute on State Highway 2 in south Wairarapa around 7pm on Christmas Day.

Two more people were killed when a bus crashed near Gisborne on Christmas Eve.

Sione Taumalolo, 11, and Talita Moimoi, 33, were killed when their bus crashed down a 100 metre bank in Gisborne on Christmas Eve.

The 53 people on board were teachers and students from the Tongan Mailefihi Siulikutapu College brass band, and were on their way to Gisborne’s Methodist Parish for a Christmas Day performance.

Myung Wha Lim, 83, died after being hit by a car Auckland’s North Shore suburb of Takapuna on Friday night.

Lim’s death was the first of the official Christmas road toll period, following the Taharoto Road crash which occurred about 7pm on December 23.

A two-year-old child has also died after being hit by a car in a driveway at a property in Te Kauwhata at about 11.45am on Monday.

Late on Monday afternoon a person was killed in a crash on State Highway 3, near the Manawatu town of Ashhurst.

Counties Manukau Highway Patrol section supervisor Sergeant Mark Fleming said people are unnecessarily putting themselves, their passengers and other road users at risk in what is already a high risk time.

He said police are urging drivers watch their speed and following distances, allow extra time to reach their destination and enjoy the journey, rather than risk the safety of others by getting impatient and stressed.

“We don’t want to have to break this news to anyone else that their loved ones aren’t coming home,” Fleming said in a statement.

The holiday drowning toll is at four since it officially began on Friday.

A four-year-old boy was found unresponsive in a pool at a residential Beachlands property on Monday afternoon.

Also on Monday, a 68-year-old man drowned while kayaking near Donut Island, off the Whangamata Coast.

Another person died after slipping into a water hole while walking down to the Wainui River in Whakamarama on Saturday.

After an extensive search was carried out, the person’s body was recovered in the water at around 4pm.

The body of a woman in her late 50s or early 60s’ washed up near Waiheke Island on Sunday, and has since been identified by police.

Ten people drowned in New Zealand waters in the 2014 and 2015 holiday periods, higher than the five-year average.

At the rate it is at present, 2016 would be another record high.

Make sure you’re keeping yourself and others safe on the roads this holiday season by: