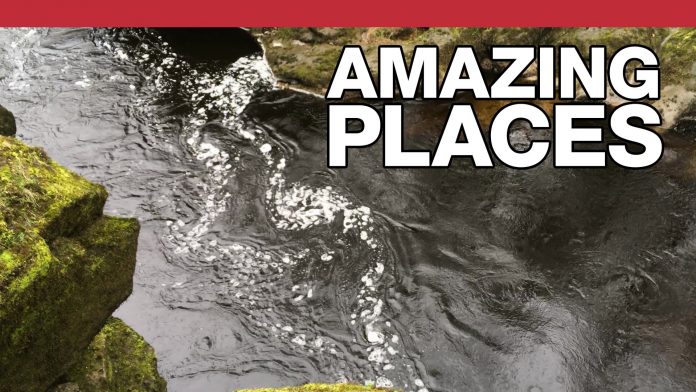 But below the burbling Yorkshire waters, is a killer.

The deceptively harmless-looking Bolton Strid, a segment of the River Wharfe that is only two metres wide, is one of the most dangerous stretches of water in the world. The New York Times reports locals claiming it has an “100 per cent fatality rate for anyone unfortunate enough to fall in while trying to jump across it”.

So why is it so deadly?

A few metres upstream from the Strid, the river is shallow and wide, about 10 metres from bank to bank. It looks picturesque and calm but don’t let that fool you.

But then the terrain squeezes the river so tightly that it is effectively turned on its side, the Times reports.

“Instead of wide and shallow, it becomes narrow and deep, a powerful wedge of water racing through a crevasse riddled with underwater caves and overhangs.

“But jump or fall in, and you could quickly find yourself sucked into an underwater crevice or pummelled against the rocky cleft walls by the current.” Jump or fall in, and you could quickly find yourself sucked into an underwater crevice.

The best-known case involving the Strid was a honeymooning couple who were swept away and drowned in a sudden flash flood in 1998.

But its danger has been known for centuries. Wordsworth wrote about a young boy who failed to leap the stream in the early 1800s and an old English saying compares its dangers to the nearby river Aire.

“Wharfe is clear, and Aire is lithe; The water gets squeezed so much the creek essentially turns on its side.

Maybe avoid trying to jump this one. Its danger has been known for centuries.
-Source