It’ll be make or break for a new on-the-go wine product once it hits New Zealand stores this year.

Wine Condoms – a rubber slip you slide over the neck of a wine bottle to keep the wine fresh – is coming to New Zealand, following its success in the US and UK.

And while the concept might be a little hard to grasp, it is perfect for the job at hand. 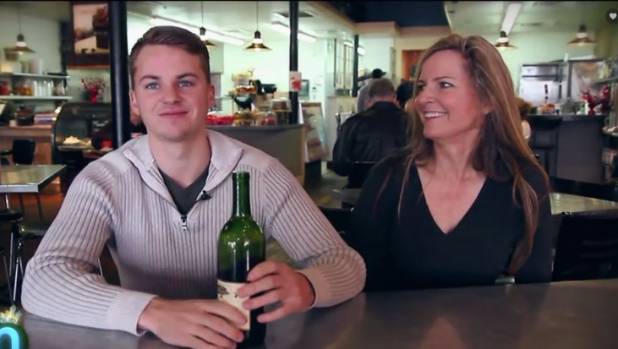 American mother-son duo – Mitch Strahan and Laura Bartlett – have invented the Wine Condom, which they will start selling in New Zealand this year.

Mother-son duo – Mitch Strahan and Laura Bartlett – are marketing it as “protection for wine lovers”.

Strahan said it all started when his mum arrived home one night from her friend’s house with a half empty wine bottle.

Because they lost the cork, her friend had temporarily sealed the bottle with glad wrap and rubber bands.

Now you could call it Kiwi ingenuity – however, as they are from Texas, it’s a bit of a stretch to call it that.

“When she set the bottle on the kitchen counter we both laughed and said ‘looks like a condom, a wine condom,’ Strahan said.

“The name sort of stuck…[it] made us laugh.”

For a year, Strahan sat on the idea.

“It took a while for me to summon the courage to do anything more than laugh at the idea – ‘What if I can’t figure out how to make this thing? What if people think it’s stupid?’ – you know, the usual self-doubt stuff every entrepreneur goes through.”

He finally launched a crowdfunding campaign in January 2014.

Since then “a lot of cool things have happened”, including a lot of media interest, he said.

“I think people really connected with our unique story: Mum and son create a wine condom – it was such a disruptive idea…

“Naturally we had fun with the taglines too: ‘Safe Sipping’ and ‘Remember, drink responsibly and use proper protection’.”

Wine Condoms were extremely difficult to create, however, they had fun trying, Strahan said.

“I can’t tell you everything about the process (that’s a company secret) but I can tell you it was very difficult finding a manufacturer.

“[And] we chose the colour black because it looks extremely classy – nobody wants a flesh-coloured wine condom, that’s just gross.”

Now, off the back of the products popularity overseas, the mother-son duo are bring them to New Zealand.

Kiwis would be able to buy them online from February 1, but would have to wait a bit longer before they were available in stores.

They were still working with retailers, so could not reveal names or locations yet, he said.

“At this time, it’s hard to pin down exact names of New Zealand retailers, as we haven’t finalised those orders yet. Rest assured, Kiwis will soon be ‘safe sipping’.”

“During this past Christmas, we had a hard time keeping in stock – 2016 Wine Condom sales were brisk, despite having quadruple the holiday inventory, we found ourselves frequently going out of stock,” Strahan said.

But now they are fully re-stocked, and ready to tackle 2017.

“We can’t wait to bring Wine Condoms to New Zealand.”