Amid the noise of a city rebuilding, along the gentle curve of a river, hundreds of people search for a name.

They are all linked by the disastrous earthquake six years ago, which killed 185 people, who are now forever memorialised on a wall in Christchurch’s centre.

Oi Manawa, meaning “tremor of the heart”, will be unveiled to the public on Wednesday. 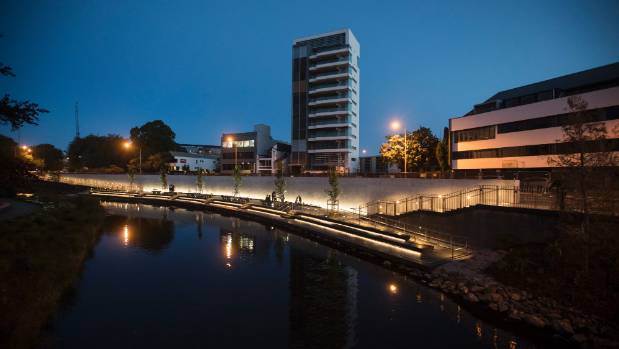 The wall trails along the Avon River.

The official memorial was shown to the friends and family of those who died on February 22, 2011. For them, it has been a long time coming.

The memorial, designed by Slovenian architect Grega Vezjak, is 112.5 metres long and made of concrete, clad in Italian marble.

On the north side of the Avon River is a reflective space, a curved bench looking onto the wall opposite.

The victims’ names span 40m and are not in alphabetical order, but grouped by where they died; the geography of the disaster mirrored on the marble.

In a private ceremony, the bereaved made their quiet descent to the river, passing a 270-kilogram slab of pounamu donated by Te Runanga o Makaawhio, and along the terrace beneath the wall.

Most paused at their loved one’s name, instinctively touching the marble.

Dr Maan Alkaisi found the name he was looking for. He sat opposite, listening to the ambient trickle of the river.

His wife, Dr Maysoon Abbas, was a doctor working on the CTV building’s fourth floor when it collapsed.

The patient she was examining, Heather Meadows, also died; their names will forever be together on the wall.

“It’s very emotional for me to see her name engraved on a wall in Christchurch, probably forever,” Alkaisi said.

“Now her name is engraved there on a wall by the river. It means a lot to me.”

It was not the design he had favoured, but his was just one voice among many. The effect of the final result was undeniably powerful, he said.

“It represents recognition of the city for my wife and to all those people we lost.

“You feel very special. It was a very emotional and strong ceremony.”

The ceremony was the largest gathering of the bereaved.

About 650 people were there, coming from Japan, China, the UK and the US, reflecting the earthquake’s many international victims.

Those who travelled the farthest were the first invited to look at the memorial. Some left flowers, glowing in the lights that shine on the names.

For local Tim Elms, who has fought for accountability for his daughter’s death in the CTV building, it could not have been better.

“It was very moving, no doubt about that,” he said.

“It brought tears to my eyes.”

His daughter, Teresa McLean, worked as a nurse. She left behind two young children.

The memorial was everything that was promised, he said.