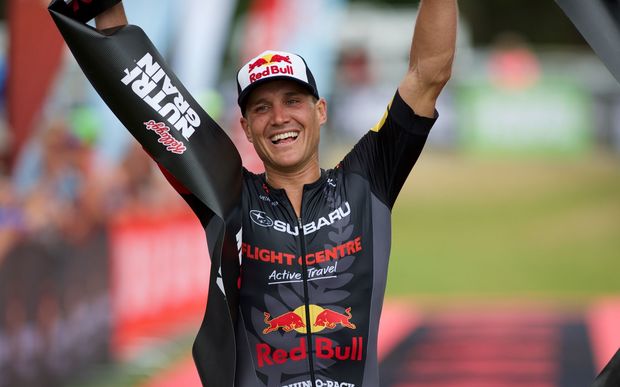 The multisport athlete, who finished second in the Coast to Coast behind Sam Clark, overtook fellow Kiwi Terenzo Bozzone early in the marathon run leg, then accelerated away from 2014 champion Albert.

With victory, Currie become the first athlete to make a successful transition between the Coast to Coast and Ironman events. He finished in a time of 8:20:58. Brown finished 3:32 back, with Cyril Viennot third.

Currie was 2:07 behind Bozzone at the end of the cycle leg, but took little time in clawing him back and moving into the race lead.

Bozzone, the South African born Kiwi, an Ironman 70.3 World Champion who cracked his first full Ironman in Western Australia in December, was hoping to push past his rival Cameron Brown for a breakthrough win in Taupo. It doesn’t look like 2017 is his year.

Currie had been part of the lead group of swimmers, including Bozzone, Albert, Clayton Fettell and Graham O’Grady, before Bozzone pulled away to lead by almost six minutes during the cycle leg.

“I just managed to sit on [Terenzo’s] feet [during the swim], blowing some bubbles,” Currie said.

“Then I got on that bike and hit the climb and obviously my mountain biking background came too and I managed to, I didn’t even want to, but managed to pull away by myself.

“It didn’t take too much longer once we hit the flats for [Terenzo] to peg me back, and he pulls up besides me and says, ‘you think this is a one lap race, mate’. But then he took off, so I don’t know what he was thinking.

“I didn’t have any game plan after that.”

Bozzone’s healthy lead slipped, however, on the up-wind return to Taupo, allowing Currie to breath down his neck in second place.

Albert, who won in Taupo in 2014 by pacing himself to perfection, something Cameron Brown does better than most, but hasn’t quite done the same in 2017.

Midway through the run, the Estonian began to fade. Brown overtook him just after thr 33km mark, taking second spot.

Defending champion Brown, looking for a record 13th Ironman NZ title, overtook Bozzone with around 13km left in the run leg, and went past the fading Albert soon after.

Brown said he’d never felt as strong as he did in 2016, and this year was a struggle.

“Today… that wind was bloody hard. It felt like you were swimming 5km rather than 3.8km, probably the hardest swim we’ve had here in 19 years,” Brown said.

“The bike was extremely tough. I thought, that’s it, I’m going to retire after this, I’m too old now. We were 14 minutes down, and, yeah. But I never gave up, gave it all I’ve got but it wasn’t quite enough.”

McCauley, a former amateur Ironman athlete and cross country start at Brigham Young University in the United States, ran down Kessler early in the marathon final leg, and showed no signs of slowing as she built up a more than 10 minute lead.

She crossed the finish in 9:08:30 for her first Ironman NZ victory, having failed to finish during the 2016 event. Laura Siddell took second, 12 minutes back, with Kessler finishing third a further five minutes behind.