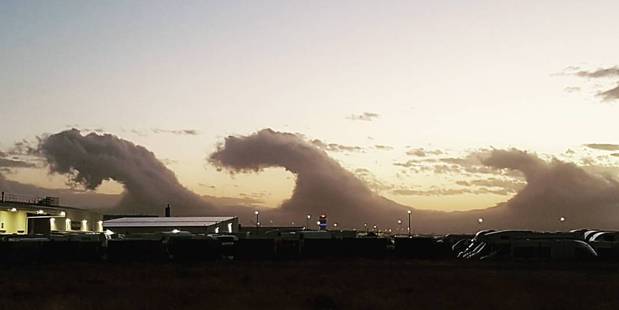 Waves looked like they were breaking in the sky above Christchurch Airport last night in the second “wave cloud” formation spotted in as many weeks around the country.

Just under two weeks ago similar wave clouds were spotted in Palmerston North, causing what MetService meteorologist Tuporo Marsters said was the best example of Kelvin-Helmholtz waves he’d ever seen.

Speaking to the Herald today, Marsters said he was “very surprised” to see the formation back again so soon.

“I think in both situations we had a ridge over the country, high pressure. In this case here the ridge was pretty stable yesterday evening, and so the westerly breeze has captured those clouds and scooped them.”

Marsters said he couldn’t remember seeing any examples of Kelvin-Helmholtz instability in New Zealand in his 30 years as a meteorologist, although he conceded that could have been because social media meant such images were easier to capture and share.

Marsters explained the phenomenon needed specific conditions including moist air in a “stable situation” – no upward movement – and a steady wind source.

“It’s the same [as in Palmerston North], they had all that low lying cloud and some wind caught the top end of it and made it curl – this was the same process.

“The top end where it curls must be where the prevailing wind [was].”

He said it looked as though the wind would have been blowing from right to left judging by the photo.

Despite the surprise at the event happening again so soon, Marsters said he was convinced both instances were genuine.

And there was no reason it wouldn’t happen again if similar conditions occurred elsewhere around the country – so keep an eye on the sky.