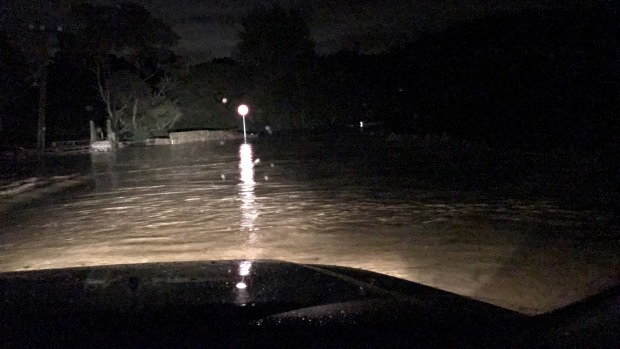 Motorists have been rescued from floodwaters and a school camping group has been evacuated as wild weather hitting the top of the country causes flooding and power outages throughout the top of the North Island.

Torrential rain has caused severe localised flooding and slips across Auckland’s southeastern coast, as well as knocking out power to hundreds of homes.

Suburbs around the Hunua ranges and Hauraki Gulf the worst hit, with up to 200mm of rain falling on the city overnight, MetService duty forecaster Heath Gullery said.

Many properties in the Papakura, Kawakawa Bay, Beachlands and Maraetai areas were directly affected by flooding and Civil Defence was warning local roads could be closed or affected by slips. One house had been evacuated.

Civil Defence was warning people in flood-hit areas to avoid travelling if possible, with at the occupants of two vehicles in Beachlands being rescued after trying to drive through floodwaters.

About 100-150 children were evacuated from the YMCA’s Camp Adair in the Hunua Ranges, due to the heavy downpours.

YMCA marketing manager Steve Bartholomew said the two groups of school children were taken with staff to the local town hall by bus.

Pukekohe resident Kevin Glen said one of the members of his staff who lived in the Hunua Ranges near the camp had sent him the picture of his driveway.

“He lives on a rural property. The bridge at the end of the driveway is a metre under water. He can’t get out,” Glen said.

“I’ve got another staff member in Clevedon. She’s by a river … and she can’t even get out of her house. The river is overflowing. Because it’s flat land, it’s encroaching on her house.”

Emergency services would “continue to support those directly affected and we should see rain easing in the next few hours and flood waters starting to recede,” Auckland Council’s head of emergency operations Adam Davis said.
“As we head into the morning commute we’re asking people to be patient and sensible. Roads are closed due to slips, conditions are messy and slippery, and areas are flooded”.

In Papakura and Clevedon severe inland flooding had closed roads with stormwater mains affected. Fire Service and Auckland Council Stormwater were responding with at least one property being evacuated with assistance of the Fire Service, Civil Defence said.

In Kawakawa Bay 15 houses were affected by flooding, and slips on Turei Hill were preventing people getting out of the area. The Fire Service was door knocking to ensure residents were alright.

Significant flooding had occurred around Beachlands, affecting some properties, and slips were making some roads impassable, Civil Defence said. People from two vehicles had been rescued from floodwaters.

In the Waikato downpours were threatening homes in the southern Coromandel, with Civil Defence anticipating some residents may have to evacuate. There were also reports of substantial flooding around Whangamata, Hikuai, Tairua and Pauanui.

Thames, Mercury Bay and Coromandel Town areas had been affected by flooding.

The NZ Transport Agency advised people to avoid all non-essential travel in the region with flooding closing roads in the Coromandel.

“Our contractors are currently out checking the roads and we are expecting the closures we have so far to be in place for several hours at least,” NZTA Regional Performance Manager, Karen Boyt, said.

“For now people should stay off the roads if they can because there is a high risk of flooding and slips.”

About 1000 homes in Auckland were without power on Wednesday morning due to weather-related outages.

Lines company Vector said some outages had been restored overnight but crews had been temporarily stood down in Takanini, Clevedon, and Whitford because of flooding.

Currently 790 customers were without power in  Clevedon, Kawakawa and Orere Point and crews cannot access the area yet. Power is expected to be restored in the afternoon.

In Whitford, 42 houses are affected, and in Takanini 51. In both areas, power is expected to be restored about lunchtime.

Lines are down on trees on Omaha Valley Road, cutting power to 52 customers, and similar problems in Onetangi on Waiheke are affecting 49.

A Castor Bay resident said a transformer outside her house “blew up” as she watched. The “whole valley” was dark, from Beach Rd up to East Coast Rd, she said.

MetService issued a severe thunderstorm watch for Auckland, Coromandel Peninsula, Waikato and Bay of Plenty just before 10pm on Tuesday.

The warning was in place until 8am.

MetService expected very heavy rain to hit areas from Northland down to the Taranaki and the northern Bay of Plenty over Tuesday evening and Wednesday morning.

On Thursday, heavy rain is forecast to hit the north of the country again after mostly clearing out on Wednesday afternoon.

The rain is part of a complex airflow that contains two separate lows, which are dragging in warm air from the tropics. Warmer air can carry more moisture.