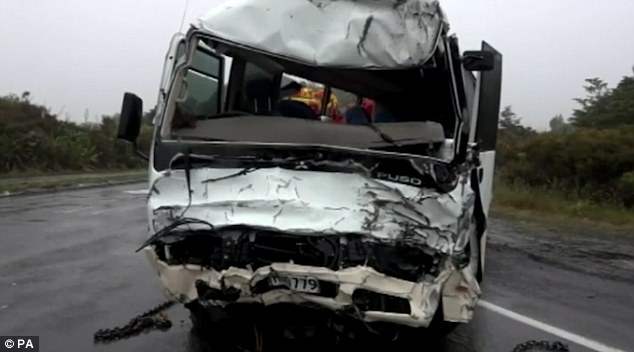 Nursing a gash to his head and painful cracked ribs, 76-year-old Tom Hickey asked one of his Kiwi saviours who had paid them to come to his aid.

The Canadian widower was 10 days into a dream New Zealand holiday when the Moa Trek bus he was a passenger in plunged over a steep bank and landed on its side in a stream 10m below.

Fifteen people – a driver and 14 tourists from North America and the United Kingdom – were left with injuries ranging from minor to serious after the crash at the intersection of State Highways 47 and 48, near Chateau Tongariro, on January 15.

Hickey, who was among the walking wounded, was so impressed by the emergency response to their plight he asked one of the first responders how they were funded.

With those coming to the tourists’ aid including donation-funded organisations such as St John Ambulance and Land Search and Rescue, along with the volunteer fire brigades and
rescue helicopters, he was told they were able to help thanks to generosity of others.

Hickey knows his travel insurance will be used to pay some of the cost of his care, but he wants to do something more.

He’s making inquiries about how to donate $1000 to some of the organisations which helped.

“This is personal … they took such good care of everybody, right from the beginning. Nobody was taking our names down or asking for credit cards.”

On the morning of the crash Hickey, a retired lawyer, was sitting behind the bus driver when he heard a gasp.

He looked up from his iPad to see the bus heading towards a guard rail, which stood no chance against its weight.

As the bus tumbled down the slope he “just curled up”.

Following the impact, he helped free the injured bus driver, but was also met with a terrifying sight – water was pouring in the through where the front window had been.

“I was deathly afraid of drowning. I thought we were in deep water, not a stream, and it was washing up to my waist.

“I didn’t know we were on the bottom, I thought we were sinking. I was screaming at the passengers in the back ‘break the window, break the window’.”

Two passersby came to the passengers’ aid, with one man holding the upper body of a woman trapped by her legs at the front of the bus, Hickey said.

The woman’s weight was pulling at her trapped legs and she was in pain.

“He stayed and held her on his shoulders for a long time.”

The other man helped Hickey out the window of the bus and up the slope, Hickey climbing over the man’s body as they struggled up the steep slope. Other passengers escaped from the back of the bus.

Police are investigating the cause of the crash and a spokeswoman said today that was continuing with no charges laid at this stage.

Hickey did not know what had gone wrong, but he held no grudge whatever the cause.

And despite his injuries, which included a lifesaving one shared by all the passengers – a large bruise from the seatbelt – he had continued his tour soon after the crash.

“I tell people ‘I’m a senior adventure traveller’. I got more than I bargained for this time.”