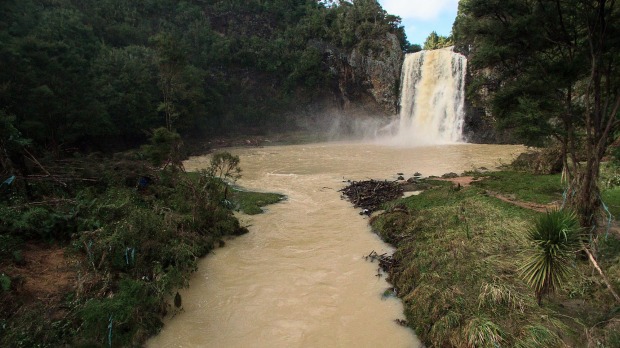 Northland, Coromandel and Bay of Plenty are staring down the barrel of another sopping wet day.

MetService has issued heavy rain warnings for the areas in the upper-North Island through to Saturday, with thundery falls.

As much as 200 millimetres of rain was expected to fall in Northland through to early Saturday morning, MetService said.

The Far North could have a short reprieve on Friday morning but the heavy rain was expected to pick back up during the day until it eased on Saturday morning. Rain was also expected to become heavy in Coromandel Peninsula and Bay of Plenty during Friday then ease later Saturday, where up to 140mm of rain might accumulate.

“Rainfall in these already sodden areas is likely to cause rivers and streams to rise rapidly. It can also lead to flash flooding and hazardous driving conditions.”

Coromandel and Bay of Plenty were all looking at peak rainfall intensities of up to 25mm an hour; possibly more during thunderstorms. Northland could reach up to 40mm an hour. The already drenched upper-North Island will have to endure a few more days of rain.

The thunderstorms during the past couple of days had brought a cluster of lightning strikes over the North Island.

MetService Meteorologist Peter Little said the weather situation wasn’t showing any signs of changing during the next few days, with more bands of heavy rain and thunderstorms forecast for northern New Zealand.

As well as heavy rain and thunderstorms, those in the Far North had to endure high overnight temperatures and near 100 percent humidity.

Further south, a ridge of high pressure that was bringing mostly fine weather to the remainder of the country would start to retreat southwards during Friday, allowing the bands of rain to also spread southwards, Little said.

“It’s looking like it will be wet at times over the weekend across much of the country.”

For those who are keen for the rain to go away, a shift to cooler southwesterlies was expected early next week, followed by a new ridge of high pressure and a more settled period of weather.