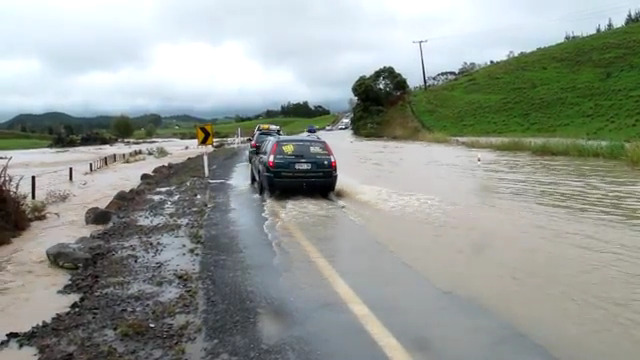 Hundreds of residents are without power and homes and streets are flooded as torrential rain strikes Auckland, Northland, Coromandel and Bay of Plenty this morning.

Hundreds are without power in Auckland, a house has been left perched above a huge slip on Waiheke Island and surface flooding has hit parts of the city.

Overnight, a mini tornado struck near Whangaparaoa while water poured into residents homes as the deluge continues.

Between 5pm and 6pm, Auckland tied its wettest March hour on record with 27.6mm of rain.

Civil Defence planning and intelligence manager Keith Hamish said up to 50mm of rain had already fallen last night on Waiheke Island and near the Waitakere Ranges.

Rain is expected to continue overnight & localised downpours are possible across the region throughout the weekend. Stay safe out there!

There were slips in Waiheke and Kawakawa Bay, and a number of flooding incidents in central Auckland.

Two vehicles had been rescued from Portland Rd in Remuera and video emerged of a man wake boarding behind a vehicle in floodwaters.

Others had been spotted kayaking in a stormwater drain on Botany Rd in Howick.

Brian Crescent resident Jil O’Brien was putting her children to bed when the rain suddenly became heavy and the wind slammed a window shut about 7.15pm.

“It lifted the trampoline from the neighbour’s house and brought it crashing down the side of our house.

“It damaged a few trees and brought the fence down.”

O’Brien said the weather event, being described by residents as a ‘mini-tornado’, frightened her children.

Residents from nearby Vipond Rd also reported that the sudden bout of wind and rain lifted some big trees in the area.

WeatherWatch.co.nz issued an alert for Auckland City and region between 7.30pm and 9pm warning of localised surface and flash flooding, and a high risk of flooding in low to medium streams and waterways.

Although there was a momentary break from the wild weather later last night, heavy rain was again striking regions this morning.

Auckland Mayor Phil Goff tweeted a photo of flooded Clevedon River last night, saying he will be “out with Civil Defence at first light to check on damage and help needed.”

Flooding has been reported in some suburbs, as downpours continue this morning.

He witnessed several cars backed up near the overbridge on Walpole St, as deep floodwater swamped the road. A number of vehicles attempted to drive through the water but became stuck, some needing to be towed out.

“I’ve never seen anything like it,” said Rostron who watched on as members of the public tried to direct traffic.

A St John spokeswoman said the ambulance was towed after becoming trapped by flooding on 309 Rd, towards Whitianga.

There were no patients in the ambulance.

The Warriors’ game in Auckland and the Chiefs-Hurricanes Super Rugby match in Hamilton were played in dire conditions last night.

Northland residents have self-evacuated and one family is reportedly trapped by floodwaters.

In Auckland hundreds are without power and trains have reportedly been stopped on the tracks near Glen Innes.

Wet weather has caused a number of events to be cancelled or postponed.

A cliff is slipping into the ocean beneath a house on Waiheke Island.

Far North Civil Defence spokesperson Bill Hutchinson said a family was reportedly trapped by floodwaters up the flood-prone Waiomio Valley, just south of Kawakawa, but emergency services were unable to reach them.

Some residents in the area had self-evacuated to Mohinui Marae.

The Kawakawa Fire Brigade brought in an inflatable boat in case they had to mount a rescue overnight but Hutchinson said water levels were dropping.

MetService issued severe weather warnings across the top of the country as three distinct bands of rain would pass over Northland, Auckland, Coromandel, Whakatane and Gisborne between 4pm yesterday and 4am today.

The MetService have warned that the Kauaeranga spillway may need to be activated again if the river reaches 10m. This could close State Highway 25 south of Thames.

There had already been 66mm of rain recorded at the Pinnacles three hours last night, causing the river level to rise to over 9m.

Another 60m to 90mm of rain could accumulate by 10am today.

The Northern Fire Service responded to several calls of water coming into people’s homes through basements and ceilings in east Auckland, Silverdale, Waiheke and Whangamata.

“Because of the amount of water, there is not a lot we can do.”

The weather also wreaked travel havoc in Auckland, including leaving commuters stranded after trains reportedly stopped on the tracks around Glen Innes.

Auckland resident Daman Singh said his daughter rang him to say she had been stuck on a train for 15 minutes.

“The trains are waiting to get the water cleared but the weather is getting worse so I don’t think it’s going to be clear very soon.”

Eastern & Onehunga line trains are running at a reduced frequency due to severe weather.
^SB https://t.co/ag8NqQ6C7W

Auckland Transport advised commuters to use Southern line services and transfer to a rail shuttle between Penrose platform 3 and Onehunga.

Hundreds of Aucklanders are without power and even more are being warned of potential outages as more torrential rain sets in.

Maraetai residents were also affected by the weather, which caused a power outage to 368 homes. Power was later restored in the area.

A Vector spokesperson said the company was expecting a number of power outages as heavy downpours kicked in overnight and had been working with Civil Defence to prepare for the severe weather.

Vector crews were working to restore power to homes in Glen Eden, Silverdale and Torbay but are facing heavy rain and in some areas wind gusts.

Crews are unable to restore power in Kawakawa Bay which is inaccessible due to flooding.

Flooding and slippages have caused damage on the electricity network with poles slipping, trees down on lines, and a flooded transformer.

A Vector spokesperson said they are expecting more outages overnight and were working with Civil Defence to keep residents informed of any issues.

Crews and storm management teams are on standby.

Vector has reminded people to stay away from damaged electrical equipment and report issues via their phone line 0508 Vector.

The weather has also taken its toll on the Far North’s power network. This morning 600 households were without power, mainly in Oue, Waimamaku and Horeke in South Hokianga.

Power was restored to all but 60 households by 4pm.

A Top Energy linemen had to call in police when a hostile landowner refused to allow them access to damaged lines in the Wekaweka Valley.

“We have concerns about land slips causing poles to fall and trees falling on lines.

“People should stay well clear and keep animals clear of any fallen lines.”

Upper North Island residents are also being warned of phone and internet outages.

More heavy rain kicked in again around midnight and a third band started striking about 4am.

People on the East Coast should prepare to be slammed by more huge downpours.

Civil Defence urged Northlanders to keep up to date with the latest weather forecasts as MetService predicted another 100mm-130mm rain for the north in the 21 hours through to 6am today.

MetService has also forecast peak intensities of 25mm per hour or possibly more in thunderstorms over that period.

Northland Civil Defence Emergency Management (CDEM) Group spokeswoman Victoria Randall said the latest rainfall figures provided by Northland Regional Council showed that up to 210mm of rain had fallen in the upper Waitangi River near Lake Omapere since 6am on Tuesday.

River and stream levels in the region are being monitored closely, with special attention being paid to the Kaeo, Waitangi, Whakapara and Mangakahia rivers. There are risks of flash flooding in some areas caused by heavy, localised thunderstorms.

There has already been flooding on State Highway 10 at the bottom of the Bulls Gorge south of Kerikeri, causing hundreds of vehicles to back up in either direction around 3pm today. A single police officer attempted to control the chaos.

Randall said it is very likely that State Highway 10 just north-east of Kaeo would flood with last night’s high tide about 7pm.

“Conditions are still fairly hazardous for driving and people need to be aware of the possibility of surface and localised flooding so please take care, only travel if necessary and keep informed before you leave.

“There are number of ways you can do this including options such as the AA Roadwatch website, local radio or social media.”

Civil Defence was also warning farmers to move stock to higher ground if they have any concerns.

Yesterday, two properties in Whangamata were deemed uninhabitable, with Civil Defence engineers assessing structural damage to properties that have been reported as “at-risk”.

Civil Defence controller Garry Towler said two Whangamata properties are currently uninhabitable and another 10 are being assessed by experts.

Road closures as well as internet and power outages are also being reported.

The top half of the North Island is seeing a number of faults across the Chorus network.

In Whangamata, the core fibre damaged in a slip on Wednesday has been repaired, restoring broadband and voice services to customers of all but one of the Chorus roadside cabinets in the area. Work is under way to repair a secondary fibre that will restore broadband and voice services to customers served by the final street cabinet. That is expected to be completed today.

In a statement issued yesterday afternoon, Chorus apologised to customers who may have lost phone or internet services, with the company saying it was working with its service companies in the regions to safely restore services.

The Whangamata bypass, SH25 Harry Watt Rd to Port Rd, is closed in both directions while Whangamata’s Avalon Rd is also closed due to slips. Contractors are trying to clear the situation.

The Kauaeranga Valley Rd is closed from the Kauaeranga Visitor centre upwards. All camping, hut and walking tracks are inaccessible.

“This is our priority at the moment as the pipe has moved due to subsidence from the flooding over the past few days. We’ve got earthmoving machines in stabilising the pipe and this will take the afternoon to fix. We have a back-up supply, so people don’t need to worry about their water supply.”

The Kerikeri fire brigade was called out four times in less than half an hour on Thursday, starting at 12.35pm when rainwater brought down part of the ceiling in a Kemp Rd home. All four calls were weather related.

One of the worst-hit businesses was the Soundlounge in Kerikeri, Northland’s only independent record store, where on Thursday afternoon water from an overflowing gutter entered the ceiling cavity and gushed into the shop, damaging thousands of dollars’ worth of stock.

The heavy rain forced the cancellation of the first day of the biennial Te Ahuareka o Ngati Hine Festival yesterday, which normally brings thousands of people to Otiria Marae near Moerewa.

A concert last night featuring Fat 32, Huaki Puanaki, Ruia Aperahama, Russell Harrison and Troy Kingi was going ahead as planned, however. Organisers are due to make a decision about day two of the festival, which celebrates everything related to the Ngati Hine iwi, first thing today.