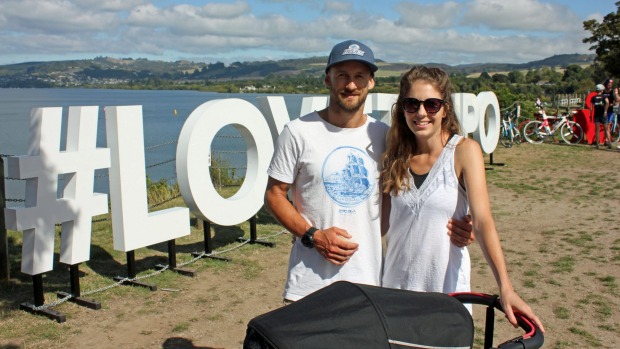 That’s what Destination Great Lake Taupo are asking the community over the next few weeks.

A 2-metre-tall temporary sign went up on March 1 to entertain all those visiting Taupo for Ironman NZ. 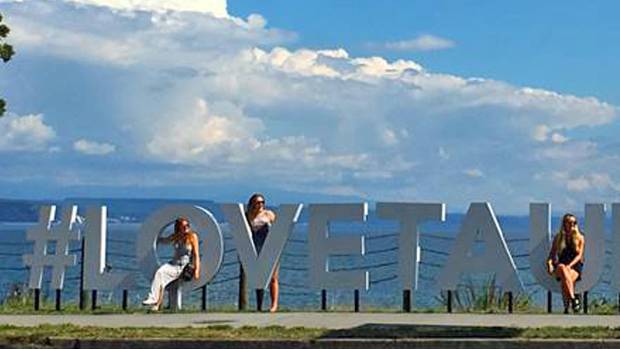 Some however, such as Neighbourly user Katrin Wilson, say the temporary sign’s location between the Roberts St bars and the lake is not ideal though.

“There’s no need to spoil the natural vista of the lake and mountains with that sign,” she said.

Others, such as Andreia Short, said on the Taupo Times Facebook page that the risks of a roadside attraction needed to be considered.

“It’s a great idea and should be a permanent feature, just not there where someone is going to get killed walking across a blind corner to the median strip to take a photo of it,” she said.

“Saw so many close calls on Sunday.”

A permanent spot on the lakefront was one consideration, she said.

“With something like that, we want people to be capturing the beautiful scenery along in with the sign,” she said

“We thought about putting it at the top of Control Gate Hill by the lookout.  If it was a permanent one we might make it bigger,” McLaren said.

“The other option would be at the start of the ETA [East Taupo Arterial road] where a lot of traffic is diverting around Taupo.  We’re thinking about things that will attract people into Taupo town, but we’re not sure if that’d be the right thing.”

Concerns about vandalism were valid, but the risks could be managed, McLaren said.

“That could be said for any of the sculptures we’ve got around town, and they’ve been well respected.

“It’s easy to cover these in anti-graffiti vinyl covering. We do that on the NZTA signs when you’re coming into town. It means you can clean it easily, and the graffiti just comes off.

McLaren said following feedback, a decision would be made by the end of March. Then, following four to six weeks to complete a resource consent process, the new sign would be unveiled around June 3.

* To share your ideas about the location for a permanent sign, email anna@greatlaketaupo.com with #LOVETAUPO in the subject line.