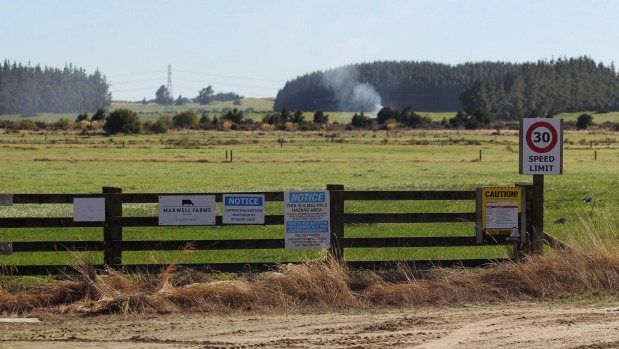 A third person has died after a house fire on the Rangitaiki Plains near Taupo in the early hours of Friday morning.

Police confirmed a man had died of his injuries on Friday night.

A woman and an infant were also killed in the fire, and were extended family of the occupants. A cordon is in place at the entrance of the Rangitaiki house in the aftermath of the fatal fire.

Police say a scene examination is ongoing and will be continued on Saturday.

A family friend who declined to give her name said the occupants of the house were a nine-months pregnant mother, her male partner, their eight-year-old special-needs son, the mother’s teenage sister and the sister’s six-month-old infant.

The family have only been recently joined by the teenager and her child, the friend said. A family friend identified the occupants of the house as an extended family of three adults, a schoolboy and an infant.

She said she could not be positive who the survivors were, except that the schoolboy had been provided with clothes by the local school before he boarded the helicopter.

She could also not be positive if a visitor was involved or if a family member was away.

“We just hope the two who died didn’t suffer.”

Marion Klaus is owner of the Rangitaiki Tavern saw the helicopter and the lights of the emergency vehicles. “It’s a pretty devatasting morning.”
The Rangitaiki community are pulling together after the death of a woman and infant in an early morning fire.

Taupo Mayor David Trewavas said that neighbours are reeling, but they will do all they can to help those affected by the fire.

Three people from the property were flown to Waikato Hospital after the farmhouse – understood to be four-years-old – went up in flames on State Highway 5 at Rangitaiki, about 40km east of Taupo, just before 3am on Friday.

“The community are very tight-knit and they will certainly be feeling the full effect of this tragic accident,” Trewavas said.

“The area had to recently pull together when unseasonable weather hit including snow.”

When fire crews arrived about 3am, the 20-by-30 metre house was engulfed in flames, Northern Fire Communications shift manager Scott Osmond said.

Three people managed to escape the fire and were treated by ambulance staff before being flown to hospital.

A man and a woman were treated at Waikato Hospital, but were later discharged. Another man, who was initially in critical condition in the Intensive Care Unit died of his injuries.

Sounding alarms could be heard from the house down the end of a long driveway blanketed in early morning fog.

It was understood the victims, who were relatively new to the area, were from one or possibly two families who were living on the large dairy farm consisting of two milking sheds not far from the Rangitaiki Tavern.

Tavern owner Marion Klaus said the town has been devastated by it.

“I didn’t know them personally, but I think they would have come in here before.”

She didn’t see the fire, but heard the helicopters and saw flashing lights as she was opening up about before 5am on Friday.

“The community has just been amazing. They’ve just pitched in together as Kiwis do.”

A neighbour, who did not wish to be named, said a lot of residents had woken to the news.

“It’s been an early morning fire, so the community are waking up to it and it’s a bit of a shock,” she said early on Friday.

She said they were anxiously waiting for more news, but it was devastating to hear what happened.

“We need to wait and see what happens – everyone has been taken to hospital.”

It was another blow for the small community that last year went through a month of no power amid a snowstorm, she said.

“I think everyone is in shock – we will be getting together at some stage to digest it all. It’s going to be a tough day for us all.”

Amid the fog early on Friday, residents began to gather at the Rangitaiki Tavern.

A man who answered the phone said people started to arrive at 7.30am.

“We are the hub of the place … we don’t know the true facts yet.”

Dog trials were set to take place nearby on Lochinver Station on Friday.

It was understood the destroyed house was on a farm previously owned by the Maxwell family, but had recently been sold.

Osmond said the blaze was in one of a few houses on a large dairy farm, not far from a rotary milking shed.

A fire investigator was at the scene along with fire crews from Taupo.

Taupo Detective Senior Sergeant Matt Cranshaw said police were in the early stages of the investigation and were keeping an open mind as to the cause of the blaze.