A swimmer has been filmed using a moving train as a platform to jump into the river below.

Children on the Ngaruawahia rail bridge have been worrying train drivers for generations, though Sunday’s stunt brought even more danger.

It could have ended with a death or lost limbs, KiwiRail says, but that message isn’t keeping kids out of the way of passing trains.

A hot Sunday drew a crowd to the bridge – including Hamiltonian Simon Howe, who started filming after a minute-long honk about 3pm.

It was the third train he’d seen on a day of swimming, and having a few jumps himself, and it came to a complete stop as kids teased the driver. 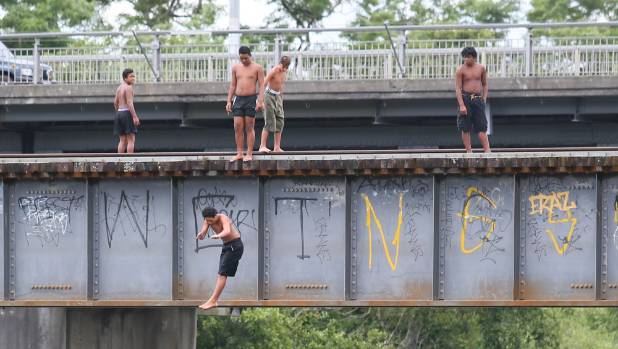 The issue of people on the Ngaruawahia rail bridge has been a thorn in KiwiRail’s side for years. (FILE PHOTO)

“[The driver] was just beeping its horn and refused to go any further everyone jumped off the bridge,” he said.

“Two guys jumped on to the back of the train and then, when the train started going again, they jumped off the train again.”

Howe only caught one of the jumpers on video – someone he knows but doesn’t want to name – and said he later found out there was a second.

Police arrived about 20 minutes later and tried to clear the bridge.

Howe shared the video on social media and said many people applauded the train jumper.

“No-one’s gone to that level before. It sort of made him a bit famous.”

“I do feel sorry for the train drivers. It’s pretty harsh for them, but in the same hand, it’s what they’ve been doing for many years in Ngaruawahia. It’s what they do, it’s what their uncles and their fathers do… It’s somewhat culture.”

High fences were put around the bridge and included barbed wire, he said, but someone has taken that down.

So the swimmers are back on the bridge and, though the trains toot as they go through the town, no-one has much regard for them, he said.

Some of the kids he has seen look about six years old.

People on the Ngaruawahia rail bridge have been a thorn in KiwiRail’s side for years, general manager of asset management David Gordon said.

The person in the video could have slipped between the carriages and been killed or lost limbs.

“You’ve got a group of kids who are going to be daredevils. They are not really considering what the implications are for them, and I think more for their families than anything, if one of them gets hurt,” Gordon said.

“We’ve talked to the council about what you can do and we’ve talked to the police about it. It is just seemingly an intractable problem – which is not a great thing to say, but we’ve not been able to find ourselves a way through this.”

Fencing it off didn’t work, and even if security guards were stationed there it would be hard to keep up with large groups of children.

“It’s a really challenging one because you can’t really make the bridge jumping-off-proof. It’s just impossible to do that. And saying to the kids ‘Don’t do that, don’t do that’ from an authority point of view, it’s pretty challenging,” Gordon said.

And with people on the bridge every time there’s a hot day, he feels most sorry for the train drivers.