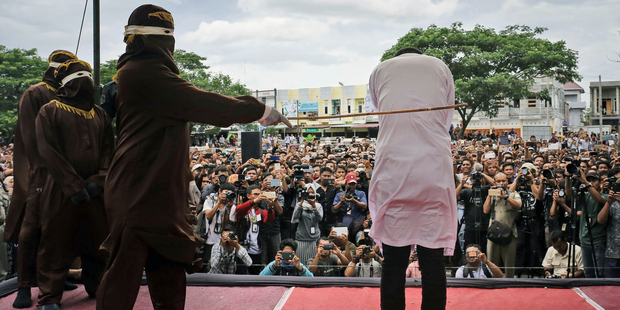 Two men in Indonesia’s Aceh province were publicly caned on Tuesday for consensual gay sex, a punishment that intensifies an anti-gay backlash in the world’s most populous Muslim country. 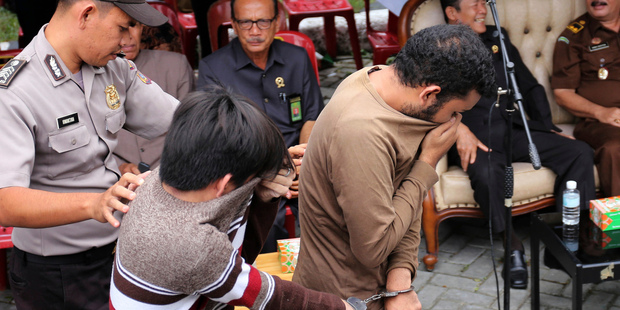 More than a thousand people packed the courtyard of a mosque to witness the caning, which was the first time that Aceh, the only province in Indonesia to practice Shariah law, has caned people for homosexuality. The crowd shouted insults and cheered as the men, aged 20 and 23, were whipped across the back and winced with pain.

Sarojini Mutia Irfan, a female university student who witnessed the caning, said it was a necessary deterrent.

“What they have done is like a virus that can harm people’s morale,” she said. “This kind of public punishment is an attempt to stop the spread of the virus to other communities in Aceh.”

The couple were arrested in March after neighborhood vigilantes in the provincial capital, Banda Aceh, suspected them of being gay and broke into their rented room to catch them having sex.

A Shariah court last week sentenced each man to 85 strokes, but they were caned 83 times after a remission for time spent in prison. Four heterosexual couples also were caned Tuesday, receiving a far lesser number of strokes for affection outside marriage.

With the exception of Aceh, homosexuality is not illegal in Indonesia, but the country’s low-profile LGBT community has been under siege in the past year.

Caning is also a punishment in Aceh for gambling, drinking alcohol, women who wear tight clothes and men who skip Friday prayers.