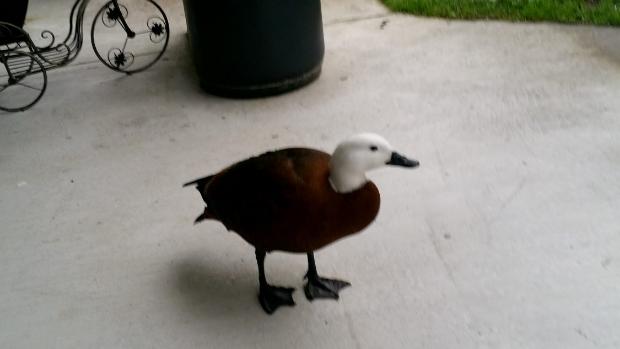 Overly friendly paradise duck Jemima became a fixture in the Masterton suburb of Lansdowne over the past couple of months, her love of companionship endearing her to adults and kids alike.

And then, as quickly as she came, she was gone.

Jemima (or Gimyma, Dot, or Doris, depending on who you ask) has been shipped off to a country lifestyle block, leaving the streets of Lansdowne a little quieter and a little less colourful. Although sinister rumours flew about disgruntled neighbours causing her departure, Lansdowne Park’s Wendy Riley said it was primarily for Jemima’s own safety.

“Everyone loved her,” Riley said. “She was just a bit too friendly. Some things stay, some can’t.”

Not everyone liked her though, she had a loud quack and would also unrelentingly follow people around, both at Lansdowne Park and the local golf course.

“I mean, every time you turned around the bloody duck was there,” one local said.

Several weeks ago, Jemima caused a stir at Wairarapa Hospital when she steadfastly refused to let ambulances leave, pecking tyres and pursuing paramedics who attempted to move her.

“She’s definitely gone to a home where she’s cherished,” Riley said. “She’s safe, and I’m sure she’ll live happily ever after.”