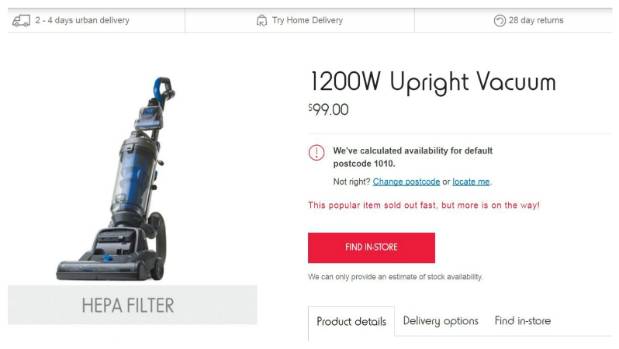 It started with a post on a Facebook, and now it’s a sensation: it’s the Kmart vacuum some people say is better than models that retail at four to five times the price!

The 1200W Upright vacuum , which is sold out in New Zealand, has a 1.3 litre dust canister, HEPA filter and a turbo brush attachment for cleaning pet hair and Kmart fans can’t get enough.

“Most people were saying it’s better than their Dyson or Kirby and yeah I’m sold on this Kmart one,” Teylor Johnson, wrote on her Facebook page.

The Daily Mail reported that some Australian stores have sold out of the Kmart 1200W Upright, and a Kmart New Zealand spokesperson confirmed the vacuum was sold out here too. New stock was expected within a fortnight.

You’ll just have to wait a wee while longer to try it out yourself!