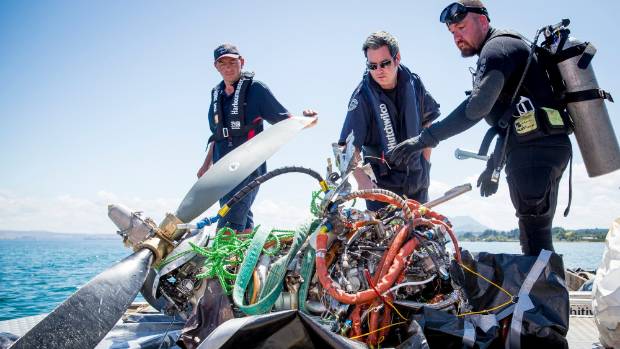 An engine fault caused a skydiving plane to cut out mid-air – at an altitude of just 640 metres – forcing the 13 people onboard to parachute to safety over Lake Taupo.

The inquiry into the incident released on Thursday also criticised evacuation procedures after the pilot left the aircraft before the last of the skydivers had bailed out.

“The pilot did not follow the operator’s recommended procedure for baling out, which put himself and others at risk of serious injury.”

Apparently the pilot checked the rear-view mirror but did not see the remaining two people due to their dark jumpsuits blending in the back of the plane, the Transport Accident Investigation Commission [TAIC] report stated.

The last skydive pair waited until the pilot’s parachute was out of the way before jumping.

All 12 parachutists and the pilot landed on the shore without serious injuries.

The pilot involved in the crash stayed with the company, but left Taupo in the two years since the incident, Clements said.

The six tandem masters on the accident flight each had between between 3,800 and 10,000 descents

“To this day, I’m still extremely proud of how those guys dealt with that situation,” he said.

“All us guys who weren’t on that load, we all have that thought: ‘I hope I would have dealt with the situation as well as those six tandem masters did’.”