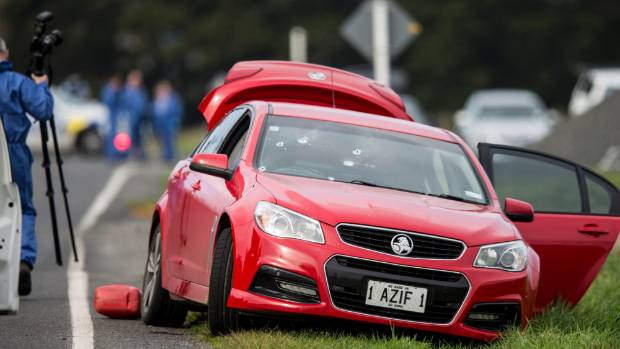 The gunman who opened fire on police officers on a rural Waikato road remains on the loose.

Police officers were forced to take cover in farmland when the man used military style semi-automatic to fire a volley of shots at three officers after a pursuit in the Waikato town of Morrinsville early Sunday.

Police said there had been no significant developments in the Morrinsville town overnight.

The gunman was yet to be arrested.

While police continued their scene examination, a section of Kuranui Rd between Avenue Rd and Scott Rd would remain closed.

Waikato District Commander Superintendent Bruce Bird said on Sunday that a 30-strong team of police, along with Armed Offenders Squad members were working to locate the gunman, who could potentially still be armed and was considered dangerous.

“This is quite frightening. It is an attack of an intensity on a police officer that I have not come across in 40 years of my service,” he said, describing the intense exchange of gunfire between the man and officers.

“I think everybody should be vigilant. We just don’t know what the mindset of this offender is.”

The incident began in Thames St, in central Morrinsville, about midnight when a lone police officer came across the late model Commodore speeding down the road

“The police officer gave pursuit for a short distance and the vehicle that was being pursued stopped and engaged with that police officer with a substantial amount of gunfire.”

“A substantial number of rounds were exchanged between police and the offender.”

Around 30 shots were fired, with at least 15 shots piercing the front windscreen of a police car.

Police were speaking to two people – a man and woman aged between 25 and 35 – who were in the car at the time.

People were asked to call police immediately, as it would give them a chance to locate “this dangerous offender as soon as possible”.

“Anything you believe may or may not be relevant, we need to hear from you.”