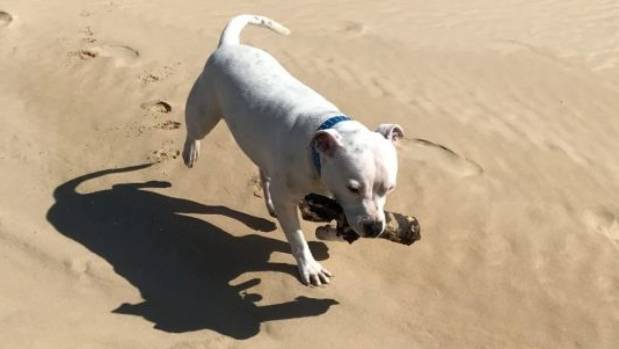 An Australian family is lucky to have returned home from a weekend away as they were unknowingly playing a risky game of fetch with their dogs.

The family were exploring the Birubi sand dunes in New South Wales on Saturday afternoon when their dogs Peppah, a white female staffy, and Brixton, a brindle-coloured male staffy, began playing fetch with what looked like an old car part.

It turned out, however, to be an unexploded WWII mortar.

“Peppah is obsessed with playing fetch but we didn’t take anything with us into the dunes,” “So she got busy finding something to play with.

“She kept dropping this rusty thing at our feet and barking at us to throw it for her.

“I thought it was a car or bike part at first until my youngest daughter said ‘dad is that a bomb?'”

“Turns out that’s exactly what it was.

“I was like ‘Peppah no, put it down’ and we tried to clear off but she kept running back and bringing parts of mortars back to us, dropping it at our feet.”

The family used Google maps to pinpoint the location of the mortar and phoned police about 4.30pm.

“There is a possibility it could have exploded in Peppah’s mouth,” he said.