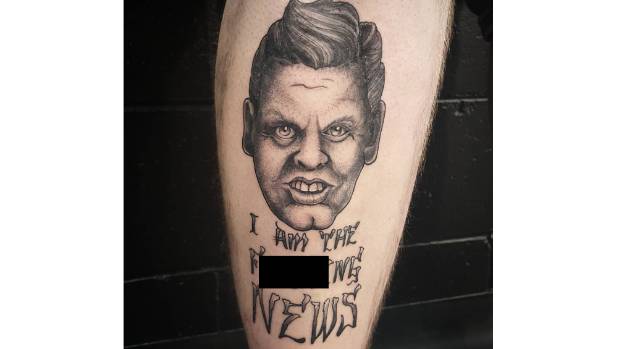 A Christchurch man has declared his admiration for Patrick Gower by getting a large tattoo of the TV reporter’s face on his leg.

Canterbury truck driver Caleb Julian spent three hours in the tattooist’s chair at Josh D Tattoos on Friday to have a caricature of the political editor of Newshub’s face and the slogan “I am the f…… news”, permanently inked onto his shin.

The slogan refers to an Auckland Law School Revue parody Gower was involved in in 2014, in which he appeared to present the news in a library and was told off by a member of the public.

“I’d seen a lot of the memes and there’s a few pages on Facebook dedicated to him, and I’ve always thought he was hilarious,” Julian said.

Caleb said he had received positive reactions about the tattoo, his sixth, with several people having asked for photos.

“Everyone loves it eh, so many people have taken photos, I’ve got a lot of miles out of it.”

The tattoo has taken some getting used to for Julian’s partner however.

“She was shocked at how big it was, I came home with it and she was wildly unamused. But she’s coming round to it and thinks its funny too.”

Julian said he never anticipated the tattoo would gain so much attention.

He hoped Gower was not offended by the tattoo, adding “that would be the opposite of what we were trying to do”.

When asked for his thoughts about the tattoo, Gower declined to comment.