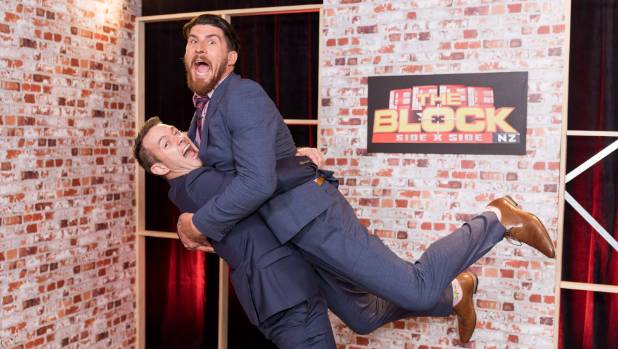 It was a shocking night for most teams, with low bids and the winners’ house failing to sell under the hammer first time round. It went back on the market after the other three sold.

Brothers-in-law and dads, Andy Murdie, 38, and Nate Ross, 33, who were initially second in the auction order, finally sold their house in the Potter Ave, Northcote development for $1,250,000, which was $31,000 above the reserve – a bigger profit than any of the other teams. After the house was allowed to go to auction for a second time.

Andy and Nate also won this year’s People’s Choice Award and received a Honda Civic RS or turbo hatch. And they’re clearly thrilled with that win, describing the whole experience as “pretty unreal”.

“We’re ecstatic but it’s hard to celebrate when everyone else is so devastated. It’s bittersweet. At the end of the day we went in thinking we had the best house and we were hoping we could win on the houses merits.”

And Nate said: “Apologies, but that’s just the way it crumbles. It was done within the rules of auctioneering and it wasn’t up to us.”

The tension was awful right through all four auctions of the biggest houses in Block history, with the order determined by brothers Ling and Zing (Levi, 22, and Zach Inglis, 24, of Christchurch), who had earlier won the right to determine who went first and who went last.

They put themselves first, a decision they probably now regret. And Ray White auctioneer Rodney Fong laid it all on, just in case you were in any doubt just how cool these houses are.. “in Ling and Zing’s words, a truly Skux home”.

But their house failed to set the room on fire. More like gasps when they had trouble reaching the reserve. There was a final call for $1,300,000. And it sold for that price, $1000 over reserve. Not a lot of cash for all that hard work over all those weeks. And Ling and Zing still have a $30,000 overdraft. Does this mean they owe $29,000?

Stace and Yanita were in the winning spot and had obviously thought they had taken it out, the look of heartbreak when the brothers -in -law took the top spot was hard to watch.

Overall the line “We’ll see you for the Block NZ next year” seemed pretty awkward. Will. not. watch. again.