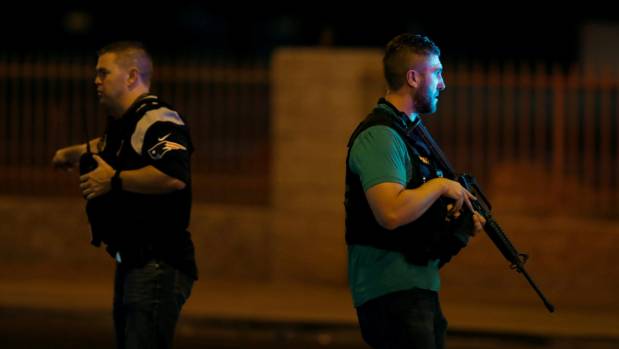 A gunman in a high-rise hotel opened fire on a country music festival on the Las Vegas Strip, killing at least 58 people and wounding more than 500 in the deadliest mass shooting in modern American history.

The gunman, identified by police as Stephen Paddock, was later killed during a standoff with officers on the 32nd floor of the Mandalay Bay Hotel and Casino, Sheriff Joseph Lombardo said during a news briefing. Media reports said Paddock was 64.

Concertgoers dove for cover or raced toward shelter through a sea of water bottles, hats, shoes and other items lost in the stampede as a hail of gunfire rained down from the Mandalay Bay around 10pm local time on Sunday (6pm Monday NZ Time).

Police believe Paddock, a local resident, was a “lone wolf” attacker. Lombardo did not give further details, however, on Paddock’s background or possible motivation.

“We have no idea what his belief system was,” Lombardo said. “Right now, we believe he was the sole aggressor and the scene is static.”

The Islamic State group claimed responsibility for the mass shooting, saying that the perpetrator was “a soldier” who had converted to Islam months ago, without providing any evidence to support the claim.

“It’s a devastating time,” Lombardo said at a news conference. “We have responded to the scene, and we’re doing the best we can to provide safety to the survivors.”

In a vision of togetherness, Las Vegas locals have been seen lining up at all hours to donate blood for the injured.

LOOK: parking lot of blood donation center on Charleston is full. At 3:48am. #Vegas is strong and compasionate. @BethFisherTV @ktnv pic.twitter.com/ltcQ3P6a9K