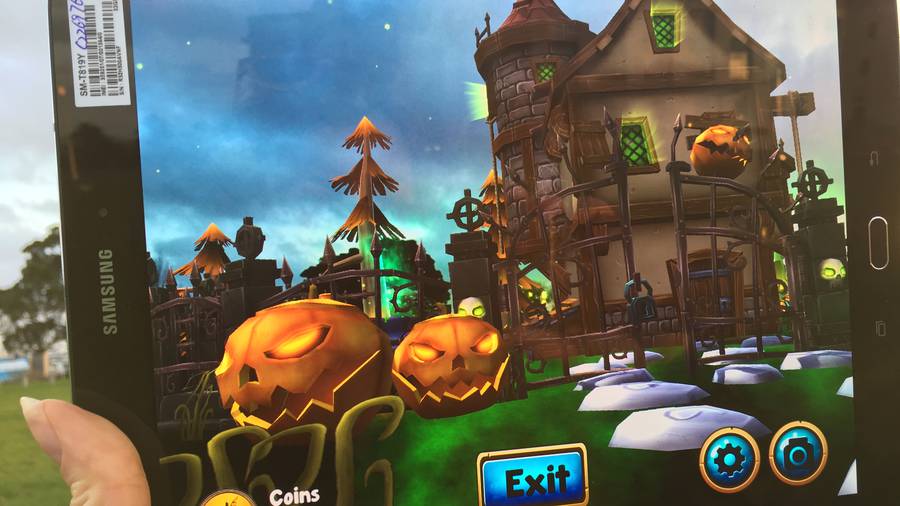 Cooks Gardens will be transformed into a Magical Park on November 3, giving children the opportunity to get active in a spooky digital playground.

The Magical Park games, including the Halloween Fright Night game that will be played at Cooks Gardens, have been created by New Zealand company Geo AR Games to get kids off the couch and active outside.

The games, which are played on smart devices, combine digital content with a real-time video feed to create immersive experiences. By pairing this with motion gaming, children explore digital content by walking and running.

Magical Park is different to the Pokemon Go game craze.

“It’s aimed at kids and families and is a community game. We try to make it as safe as possible. It’s in a park and is geofenced [if the device’s GPS is within 15m accuracy it ensures the player is always in a safe space] and still requires adult supervision.

“In our games you are 100 per cent in the world and can run around creatures, walk up to things and discover things. We try to encourage discovery and exploration.”

In the Halloween Fright Night game, players explore a haunted house, find a witch and a monster and have to locate pumpkins which are the ‘trick or treat’ component, with players receiving either virtual coins or bats.

“There’s lots to discover and we’ve tried not to make it too scary,” GEO AR’s developer said.

“Once you get your kid outside and they have had enough of playing the game, they are at a park and remember how fun things were playing outside. So I tell parents to bring bikes or scooters or a ball to play soccer. I see it like a sort of Trojan Horse. Don’t tell the kids that it’s a game that makes them exercise; tell them it’s a game in a park.”

The Halloween Fright Night game, sponsored by the Whanganui District Council, will be played at Cooks Gardens from 5.30pm to 8.30pm on Friday, November 3. It is for 6 to 11-year-olds and children must be accompanied by an adult. Bring your own smartphone or tablet. There is free Wi-Fi at the venue.

The Magical Park app is free to download in the App Store and Google Play store. If players can’t find the game in those stores their device probably does not have the hardware sensors needed to play.

Find out more about Magical Park and device requirements at www.magicalpark.net.