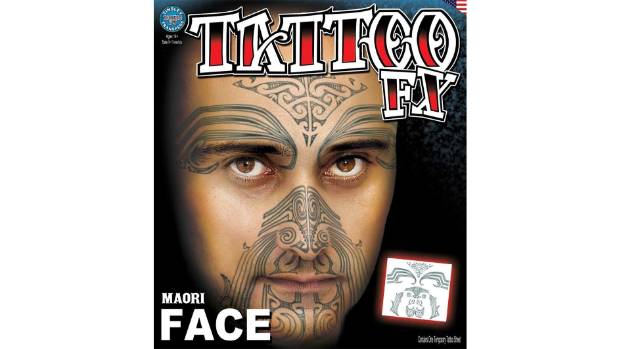 Temporary full facial moko being sold at a Halloween shop in the United States have been branded inappropriate and a “cultural rip off”.

California-based company Tinsley Transfers is the firm responsible for the image, which is being advertised as an “authentic Māori Facial Temporary Tattoo” and on sale at Halloween Hallways in Chicago.

Hamilton man Sam, who lives in Chicago was shocked to see the tattoos.

The tattoo is advertised as being “based on tribal tattooing done by the native New Zealand tribes”.

But Sam told Radio NZ he did not think customers buying the moko would understand the cultural significance, and that it was not an appropriate Halloween costume.

“The fact that it’s identified as a Māori face and is being sold as a Halloween mask which is designed to scare children in North America, I suggest is culturally offensive and misrepresents the true nature of tā moko.”

Another case of intellectual property involving moko came to light on Friday when Māori artist and founder of House of Natives Aotearoa, Gordon Toi announced he was taking legal action against an American company that reused his moko design on motorcyclist masks.

Recommendations were made to the previous National government to establish a commission to protect the intellectual property of Māori cultural works in the 2011 Ko Aotearoa Tēnei  but little has been done to implement these recommendations.