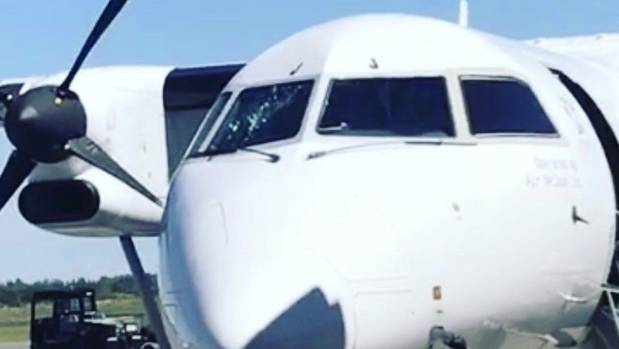 Passengers broke into applause after an Air New Zealand plane with a cracked windscreen landed following a stormy flight to Christchurch.

The turboprop plane departed Hokitika about 2.15pm on Sunday before running into turbulent conditions and sustaining a crack to its windscreen.

Passenger Danni Cameron described the flight as the worst of his life.

The Warkworth man, who was in Hokitika visiting his parents, said 15 minutes into the flight the plane suddenly “fell out of the sky”.

“It was such a sudden drop, whatever you were holding in your hands flew up into the air. If it wasn’t for the seatbelts we would have hit the ceiling.”

Not long after the drop, the pilot came over the intercom to tell passengers the windscreen had cracked, Cameron said.

The flight over the Southern Alps was “seriously rough”, in almost white-out conditions with hail and sleet visible through the windows, he said.

On arrival at Christchurch Airport, passengers broke into applause.

“The pilot said it was the most full on experience he’d had in a cockpit,” Cameron said.

The windscreen was made up of multiple layers of glass, so a crack in one layer did not undermine its integrity.