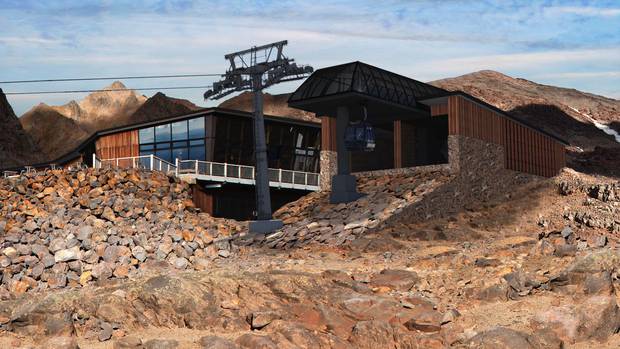 Ruapehu Alpine Lifts hopes to have a $25 million gondola ready to zoom people up the mountain in all weathers by the start of the 2019 ski season, CEO Ross Copland says.

The project is the highest economic development priority for the Ruapehu District and could eventually make for 100 new fulltime jobs. New Zealand already has at least three other gondola, at Rotorua, Christchurch and Queenstown. The gondola is to have 50 cabins, each holding 10 passengers and moving at 6m per second, Mr Copland said. It will be capable of taking 2400 people up Mt Ruapehu every hour.

It’s just one element of the $100 million the Ruapehu Alpine Lifts (RAL) board decided to invest over the next 10 years.

The gondola would leave the Whakapapa base at the Top of the Bruce and climb to Knoll Ridge, replacing the Waterfall Express chairlift. It will be better for cold and rainy weather, and be closed less often. In summer sightseers taking it will be able to take short walks, including one to a ridgeline with amazing views.

The proposed spend on the gondola follows $22 million spent on Whakapapa in the past 18 months, and $25 million spent at Turoa in 2007.