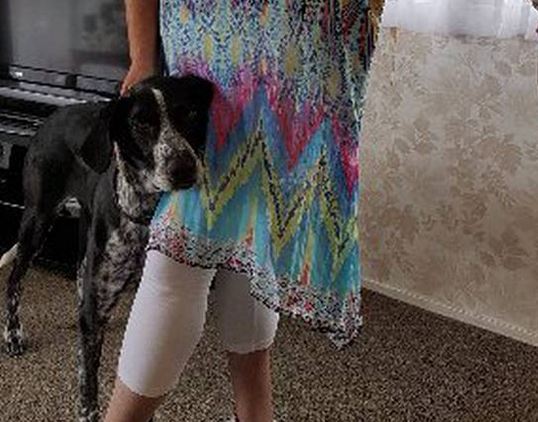 Anxiety Girl is the German short-haired pointer owned by Taupō woman Jeannie Short who not only loves her loyal, awesome and incredibly serious pet, but accepts her for all her quirks.

Anxiety Girl, whose given name is Roxy, is a generally happy dog but although she has a stable home and a loving owner, the 9-year-old’s anxiety still manifests itself in a variety of ways.

Jeannie, who is well known for her work with the Tauhara Community Support Initiative, adopted Anxiety Girl from a lifestyle block where her previous owners were moving to a smaller property and didn’t have room for her.

Jeannie has taken to posting Anxiety Girl’s funny behaviours on her Facebook page, and says her many Facebook friends like her dog’s posts more than her own.

Anxiety Girl’s main quirks revolve around the collection of blankets (she has three, and she knows if one’s missing) that she carts all around the house.

In the evening she gets her blankets out of the cupboard and carries them around.

“She’s just the most incredible dog,” says Jeannie affectionately. “She’s got quite a following. People follow her on Facebook or come around so they can watch all the strange things she does.

“She definitely has to be with people that understand the type of animal she is because she’s very, very different.