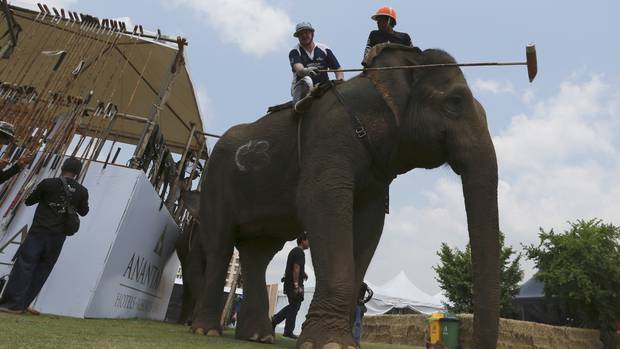 A former All Black insists he was unaware of any maltreatment of animals before competing in an annual elephant polo tournament in Thailand that has been marred by allegations of abuse and has PETA calling for it to be cancelled.

Steve McDowall, and three other former All Blacks – Olo Brown, Robin Brooke, and Charles Riechelmann – played in the final of the King’s Cup in Bangkok on Sunday.

This was after footage emerged on Friday of some of the elephants being beaten with bullhooks. The footage shared on social media by People for the Ethical Treatment of Animals (PETA), shows at least one trainer (or mahout) striking the animals with the sharp steel-tipped rods resembling fireplace pokers.

Tournament host William Heinecke confirmed the abuse to local newspaper Khao Sod and said the trainer involved in the beatings had since been fired. The incident didn’t warrant cancelling the event, he has said.

“We can’t destroy all of the good things that we’re doing with the other mahouts and the other elephants,” Heinecke said at the conclusion of the tournament.

The “PWC New Zealand All Blacks” has competed at the event before and had no official ties to New Zealand Rugby (NZR) or the All Blacks, McDowall said.

“We weren’t aware of the abuse and as everyone had said, they were totally against the abuse,” McDowall said.

“But that’s an individual that has gone out and done that. That’s not about the people in the tournament. Everyone at that tournament would be totally against that individual abusing that elephant and rightly so should be fired from it and that’s what they’ve done.”

In a statement, PETA Asia vice-president Jason Baker said the trainer’s dismissal wasn’t enough and called for the cancellation of the tournament altogether. According to Baker, the treatment of the elephants in the video was also inconsistent with the event’s claim to “create real and lasting change for elephants in need”.

“They don’t need to fire anyone, they need to cancel the event,” Baker said.