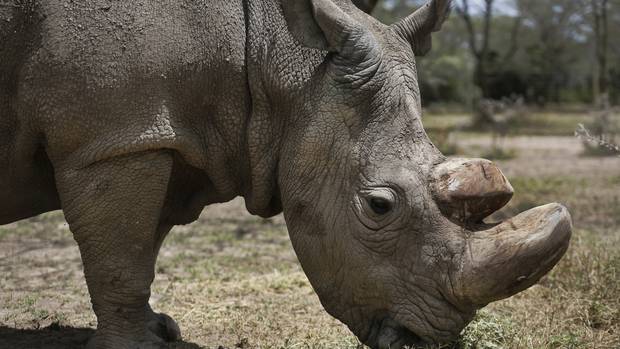 Unable to stand, and suffering from a string of infections in his advanced age, the world’s last male northern white rhino was euthanised on Monday by a veterinary team in Kenya that had fought for years to save him and his dwindling species. Only two now remain – his daughter, Najin, and granddaughter, Fatu – leaving in-vitro fertilisation from preserved sperm the last tool against extinction.

Sudan, who was 45 when he died, had unsuccessfully tried to mate with females from a related sub-species of rhino found in southern Africa. The second-to-last male, Suni, died in 2014, possibly from a heart attack. Sudan and Suni were likely too old to be fertile by the time they were brought to the Ol Pejeta Conservancy in Kenya from a zoo in the Czech Republic in 2009.

A truely sad story that the late Steve Irwin’s daughter Bindi had something to say about:

Today was heartbreaking for us all as the world says goodbye to Sudan, the last male Northern White Rhino on Earth. We are sending all our love to the team at @OlPejeta who have lost part of their family today. Now, more than ever, we must stand together and protect our rhinos. pic.twitter.com/uTX2kmUjEL