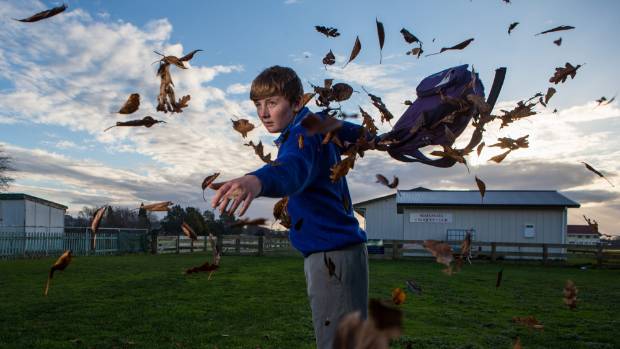 Matamata Intermediate School pupil George Jeffery was leaving school when he was caught in the twister that made an appearance throughout the Waikato town on Monday afternoon.

The weather looked fine, he said, but then the wind picked up and took him with it.

“I didn’t know what hit me,” George said. “It came out of nowhere.

“I get whipped across the legs with leaves. I see my friend running behind a house and I turn around and I just get thrown across the pathway and I go about 2 metres in the air.

“When I go to get up, a trampoline almost goes on top of me.”

The whole ordeal only took about 10 seconds, he said, but the confrontation left George with a bleeding knee and weeping sores on his shoulder, elbow and hip.

George, 13, said he was frightened by the incident, and underestimated the strength of the wind.

“It was spinning around and I thought it was going to be a mini one, but it ended up throwing me everywhere.

“I didn’t expect it to happen. I thought it was just going to be strong winds hitting me.

“When I got lifted in the air, I didn’t know what to do so I was just screaming. When I hit the ground, I got up as fast as I could and ran behind the house.”

When he got home, George was in shock, and his mum Linda Burton was oblivious to the event. She was told by witnesses that George was picked up by the inconspicuous tornado and thrown in the air.