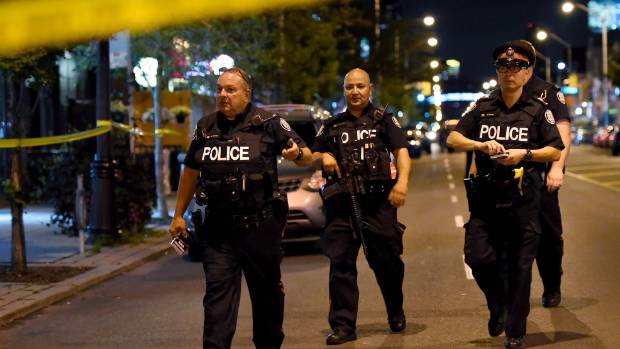 A man walked along a Toronto street firing a handgun into restaurants and cafes, shooting 14 people and killing two before dying after an exchange of gunfire with police.

Police Chief Mark Saunders did not rule out terrorism as a motive in the attack on Sunday night (Monday NZT) in the city’s lively Greektown neighbourhood, though officials did not immediately identify the assailant other than to say he was 29 years old and from Toronto.

“It’s almost inconceivable that these things can happen,” said Toronto Mayor John Tory. “We were so used to living in a city where these things didn’t happen and as we saw them going on in the world around us [we] thought they couldn’t happen here.”

“This is an attack against innocent families and our entire city.”

The dead included a 10-year-old girl and an 18-year-old woman, Saunders told a news conference on Monday. The 13 wounded ranged in age from 10 to 59, and suffered injuries ranging from serious to minor, he said. He did not name the victims.