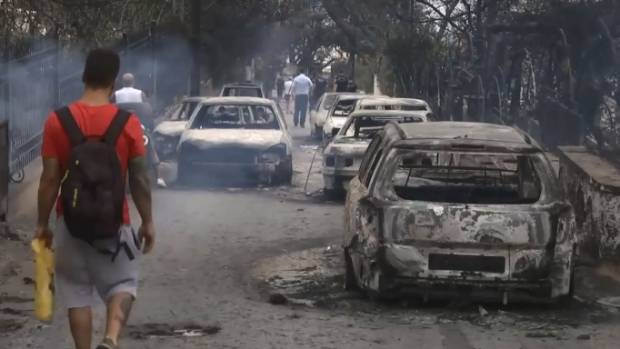 Rescue crews were searching on Wednesday (Thursday NZ Time) through charred homes and cars for those still missing after the deadliest wildfires to hit Greece in decades decimated seaside areas near Athens.

There was no official indication as to how many people might be missing, and some took to social media and Greek television stations with appeals for information on their loved ones.

Survivors described dramatic scenes of people fleeing to beaches and being forced to swim out to sea despite gale-force winds and high waves to escape choking smoke and flaming pine cones raining down into the water.

Fire service spokeswoman Stavroula Malliri said the death toll had increased by five to 79. There were fears it would increase further as rescue crews gradually went through the hundreds of burnt homes, while others searched the coastline and the sea.

Flags across Greece flew at half-staff after the prime minister declared three days of national mourning.