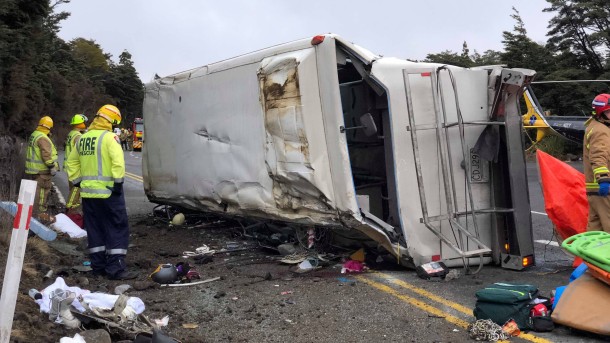 An Upper Hutt woman has described the terrifying moment the bus she was in rolled after crashing in Tongariro National Park yesterday, killing one person.

Fenella Murphy was one of the 28 passengers onboard at the time of the fatal incident, which occurred on Ohakune Mountain Road, Ohakune, around 2.30pm yesterday.

“We were just coming down from Turoa ski field and, I think about five minutes into the drive, this big emergency sort of honking noise happened. I don’t know where it came from, but I think it sort of alarmed everyone,” Ms Murphy said. 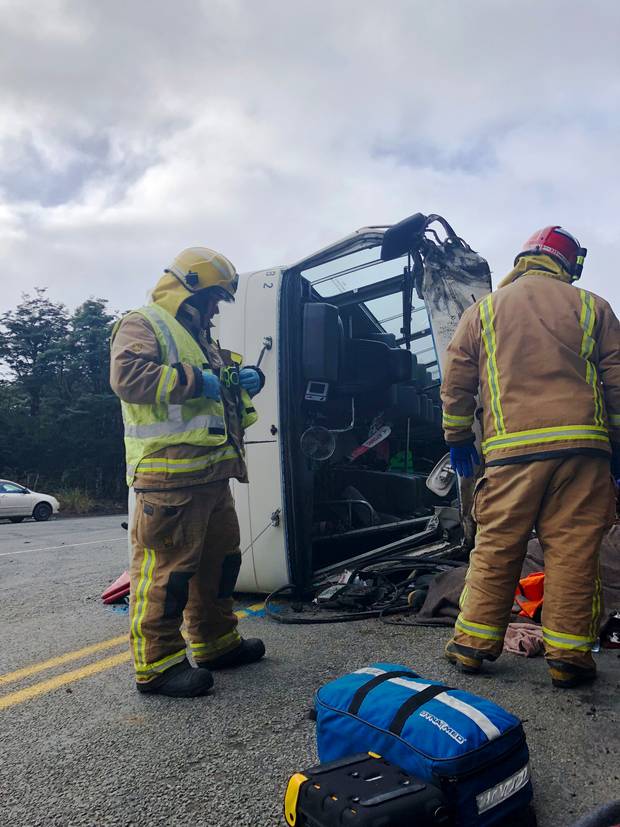 “Every time the driver would step on the brakes, it just made a funny noise and we knew that something wasn’t right.

“Then we flipped and rolled and landed on the side, just on the road.”

One person was killed and several others were injured after a bus crashed in Tongariro National Park, in Ohakune. Source: Fenella Murphy

The Tūroa ski field has suspended all Mitsubishi Fuso buses from its transport fleet after Saturday afternoon’s fatal crash.

Ruapehu Alpine Lifts CEO Ross Copland told Radio New Zealand the possibility of a mechanical fault with the bus has not been ruled out.

The bus was examined in Whanganui as part of the police investigation into the crash.

The bus driver was treated for minor injuries at Whanganui hospital.

On Sunday, Mr Copland told Newshub thorough checks were being carried out.

“We’re stepping back through our maintenance records and making sure all of our equipment is up to scratch.”

Police have confirmed that a girl was killed when the bus rolled in the Tongariro National Park yesterday.

In a statement released by police this afternoon, they said a formal identification was ongoing and the next of kin to be notified.

A spokesperson for St John says patient updates are particularly difficult due to the nature of the incident with patients being “scattered” across the country in five different hospitals.

They are all in a stable condition.

Turoa skifield was closed on Sunday for a debriefing process and will open on Monday.

Tūroa ski field is closed for the day and a blessing is to be held on site.

Other tour operators have also chosen not to operate today as a sign of respect.

My Kiwi Adventure posted on Facebook that it was a sad day for the Ruapehu region.

“Our prayers and thoughts are with the affected families of the Mt Ruapehu bus accident. While we are an independent, local transport operator, we have chosen not to operate today as a sign of respect.”

NORMAL OPERATIONS RESUME (Ross Copland, RAL CE): Yesterday a serious accident occurred on the Ohakune Mountain Road. A Mitsubishi Fuso bus operated by our company was involved in a serious crash resulting in one fatality and multiple injuries. We have suspended the operation of our other Mitsubishi Fuso from our transport fleet pending the outcome of the investigation. Mountain and shuttle operations will resume as normal tomorrow. We are all anxious to understand more about this accident and are supporting authorities with their investigation. This will take some time so we ask that you please respect the privacy of those involved in the accident and allow the process to take its course. Today a karakia was held at the accident site and support networks have been established to provide care for emergency services, staff and our injured guests. Thank you so much for all the aroha, we look forward to welcoming you back to the ski areas tomorrow. #weareturoa