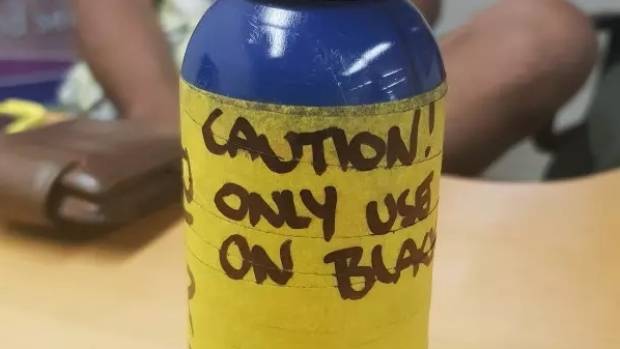 A Māori – Niuean man working for a tour company over in Queensland, Australia, was given a can labelled “Black guy repellent” when he asked his co workers for sunscreen.

On November 8, 2017, Tupetagi was told by his coworkers that there was “a present” for him in the car he was next to work on.

In the footwell of the car’s passenger front seat, he found an empty canister of sunscreen wrapped in fluorescent yellow tape, labelled ‘Black Guy Repllent’ [sic] and ‘Caution! Only use on blacks’.

The incident was just one alleged example of ongoing workplace racial vilification that the man, McDuff Tupetagi, is claiming forced him to take sick leave for mental distress and anxiety, and made him feel “like an unwanted creature or pest”.

In a statement of facts lodged in the Queensland Industrial Relations Commission this week, Tupetagi said at his work he was frequently made the butt of jokes and referred to as “the black fella”.

Tupetagi is now suing the Fraser Island tour company and two of its employees for discrimination.

The case will appear before court in a few weeks.