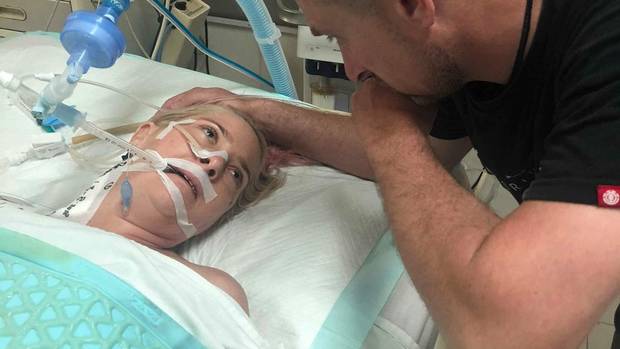 Abby Hartley, 41, was rushed into emergency surgery after falling ill on her first day of her “second honeymoon” on the Indonesian island with husband Richard on August 1.

Despite the success of the operation Hartley went on to develop acute respiratory distress syndrome before catching a severe infection causing one of her lungs to collapse.

The family created a Givealittle page to help cover the enormous hospital bills that racked up after their insurance company refused to pay. Hartley said his wife of 18 years has been hanging in there, but so far none of the antibiotics had worked, and they needed to get her home to New Zealand, which would cost up to $160,000.

“The longer we stay the sicker she is going to get, and the bills just keep increasing. We need to get her home.”

Foreign Affairs Minister Winston Peters says the Government is unable to financially assist to get the Kiwi mum home.

“I understand that Abby’s situation is a very challenging one,” Peters said in his response.

“However I have to confirm that the New Zealand Government is unable to fund the costs of medical care of evacuations for New Zealanders who become ill while overseas.”

He recommended they approach their insurers, and the New Zealand embassy in Jakarta for consular assistance.

“I wish Abby well with her recovery, and hope she is well enough to return to New Zealand soon.”