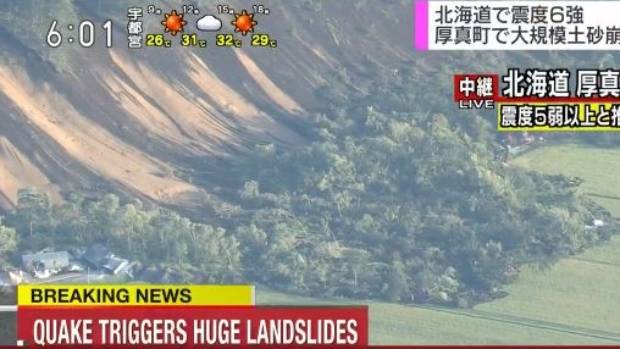 Buildings have collapsed, roads buckled, and people trapped amid widespread landslides sparked by a strong earthquake with a magnitude of 6.6 that struck the northern Japanese island of Hokkaido.

The earthquake hit at 6:07am NZ time, no tsunami warning was issued from the inland quake.

The shaking continued for at least 30 seconds, witnesses said. The quake was followed by three aftershocks, measuring up to magnitude 4.8. There were reports of at least one person was found without vital signs, with people trapped in elevators, buildings and houses following the tremors.

Around 2.95 million households in regional capital Sapporo were without power.

Earlier in the week, a powerful typhoon struck western Japan around Osaka, killing at least 10 people. The region’s main airport, Kansai International Airport, has remained closed after the storm flooded its runways and a tanker smashed into the road and rail bridge connecting the airport to the mainland.