Batman: Damned #1, the first in the publisher’s adult-aimed Black Label, is a new graphic novel set in a world where the Joker has died and Bruce Wayne, suffering from memory loss, is unsure whether he was the one who killed him.

On the offending page, the caped crusader strips completely naked to check for telling knife wounds, flashing his pert posterior in one panel, the Daily Mail reports. 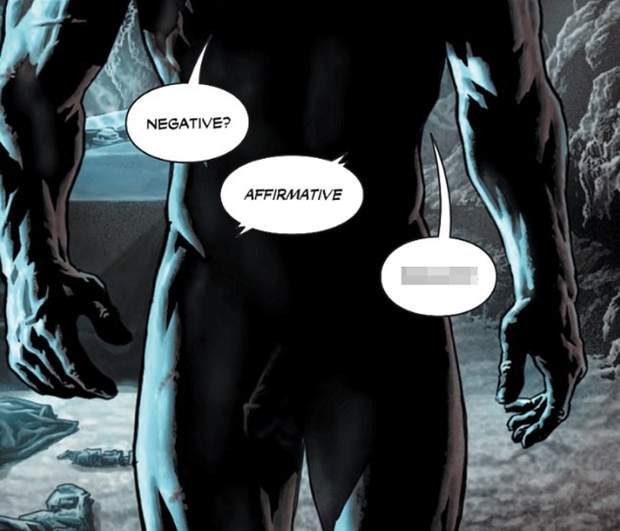 In the next two panels, his shadowy-but-unmistakable — and apparently circumcised — penis is visible.

May I remind you this is A-OK for women in regular comics but Batman can't have the faint outline of a dick in an adult line of comics pic.twitter.com/dii40AAN0S

Lol. Folks who work with my wife at the hospital asking about this comic book that shows Batman's junk. Had no idea it was this big a deal. Still don't get it, but hey

DC confirms Batman's penis will be edited out of future comics.

…another reason to see it while you can.

So DC regrets showing the Batawang. From now on they’ll be censoring the Batdong in future reprints. But that will make the Dick-not-Grayson into a collector’s item. People will rush to buy copies with the uncensored Bat “Signal”. Batman’s Jim Gordon. His Penguin. Shark repellent

The last time a Batman body part cause this much controversy was when George Clooney debuted a new batsuit with nipples in 1997’s Batman & Robin.