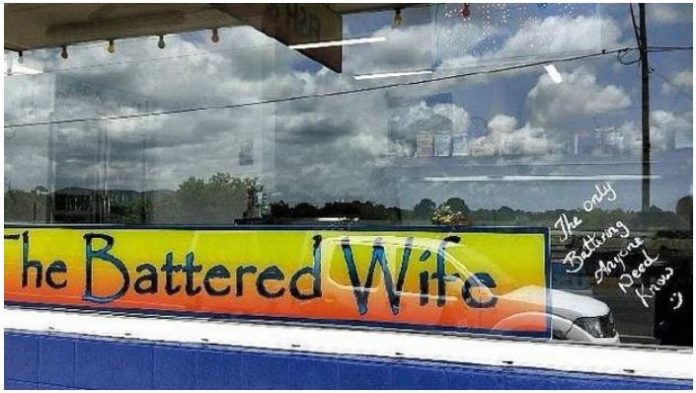 Former police officer Carolyn Kerr opened “The Battered Wife” in North Queensland more than a year ago, but after condemnation from a number of Queensland politicians, Ms Kerr has been forced to defend herself.

The controversial shopfront, which has the words “The only battering anyone need know” written in the corner, divided Australia after a number of domestic violence groups said the name was making light of men hitting women.

Speaking on Today, Ms Kerr said “There is a lot of beautiful, intelligent women out there in really bad situations and to assume that I was making light of the subject, that I was promoting it … No-one is going to walk past my shop and say, ‘The Battered Wife. Hey, how about we take some advice on this?’.”

Ms Kerr is a survivor of domestic violence herself.

She explained on Today how she came up with the name.

“Originally it was suggested to me as a little bit of a joke. But it seemed, yeah, like an interesting option with a bit of spark, you know,” she said.

Queensland Attorney-General Yvette D’Ath was one of the many to condemn the Innisfail business yesterday.

“That business is completely out of step with what (the) community’s expectations are,” Ms D’Ath said.

Despite all the backlash, Ms Kerr said she’s going to stick with the name.

“It’s a fish and chip shop first and foremost, ‘The Battered Wife’. I make good batter. I am married to my business,” she said.