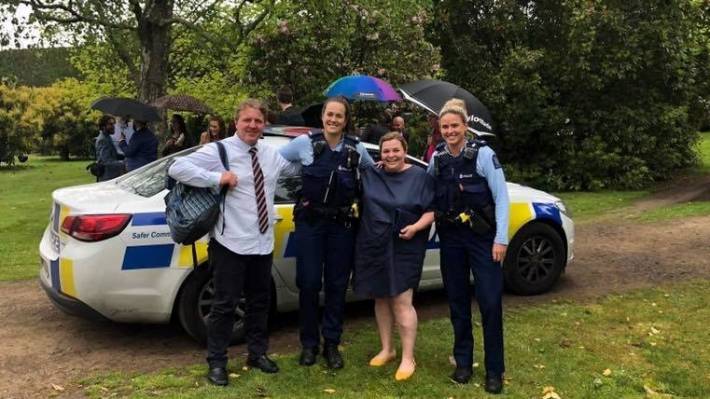 When Auckland couple the Bonischs found themselves stranded on the side of a Waikato highway at the weekend, running late to a wedding, it was police officers that came to their aid.

The pair were driving down from Auckland to a wedding on the northern outskirts of Tauranga on Saturday when their car broke down.

With 50 minutes to get to the venue – a 30-minute drive away – little chance of a taxi or Uber, and a car that wouldn’t travel more than 30kmh – the pair began to fret.

On went the hazard lights and as the couple pondered the predicament, a police car with two officers drove past in the opposite direction, returning to stop.

“We explained what had happened and where we were going – not only did they follow us back to Waihi police station so we could safely leave our car, they let us get changed in the police station.”

Then the two policewomen offered to drive the pair in the patrol car to the wedding venue.

Megan Bonisch thanked the officers for helping them out and providing a “grand entrance”.

“And making our first ever journey in a police car so memorable.”