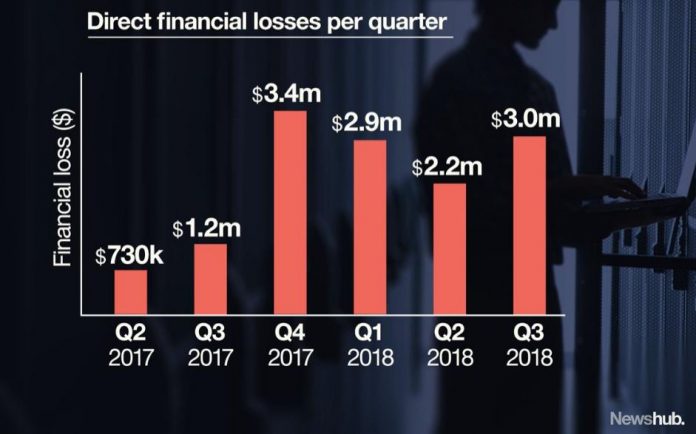 Kiwis are facing an onslaught of scams, phishing attempts and other security threats according to a report by CERT NZ, which found there were a record 870 cyber security incidents between July 1 and September 30.

The new report into cyber security threats affecting New Zealand has revealed a 90 percent increase in reported cyber scam and fraud incidents, with an 18% increase in the past quarter of the year.

“Webcam blackmail and payment scams made the largest contributions to this increase,” said CERT NZ.

But credential harvesting and phishing, where people use fraudulent means to obtain sensitive information by posing as a trustworthy entity, continue to make up the majority of reported incidents, with 468.

“Attackers used a range of techniques from ‘spoofing’ email addresses to trick recipients into thinking it was from a legitimate source, to full takeover of email accounts to do things like change bank details in invoices,” said CERT NZ.

“Online security can seem complicated, but the evidence we have shows that most incidents can be prevented by taking simple steps.”

Of the 870 incidents reports, 711 were responded to by CERT NZ, 157 were referred to police, 1 was referred to Netsafe, and another to the Department of Internal Affairs.

An additional 135 incidents were directed to other agencies for not falling within CERT NZ’s scope.