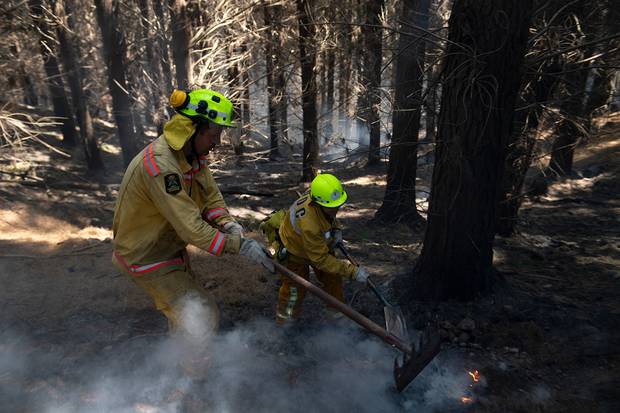 It was almost a full week since a spark flickered to flame which transformed to an all out fire last Tuesday, racing up a tinder dry Pigeon Valley hill, 30km south of Nelson, and then much, much further.

By the following Monday, yesterday, New Zealand’s largest forest fire since 1955 had blackened 2300 hectares of earth and still maintained a perimeter of 25km.

It had taken one home, forced around 3000 from others across a handful of valleys and in the Waimea Plains settlement of Wakefield, and was the focus of thousands of hours of collective toil by 150 firefighters from the far north to the deep south, the pilots of 23 helicopters, and countless others both paid and not.

Civil Defence controller Roger Ball and Fire and Emergency incident controller John Sutton came out twice a day to update the public of the endless graft to gain the upper hand on fires that scorched earth within 2km of Wakefield, population 3000, and within metres of some more rural homes.

Yesterdays update however, “I’ve got the feeling that we’re starting to turn the corner,” he said, although he quickly added firefighters would likely still be putting out the blaze in March and the bone-dry Tasman district’s fire risk remained so high forestry harvesting and the use of farm machinery are still banned.

And so, when Ball and Sutton and Hooper and the politicians stopped talking just after 4pm yesterday, their good news beamed live around the country, something new happened: Tasman District Council staff watching the announcements from the back of the press conference were clapping.

Their applause spoke for so many.