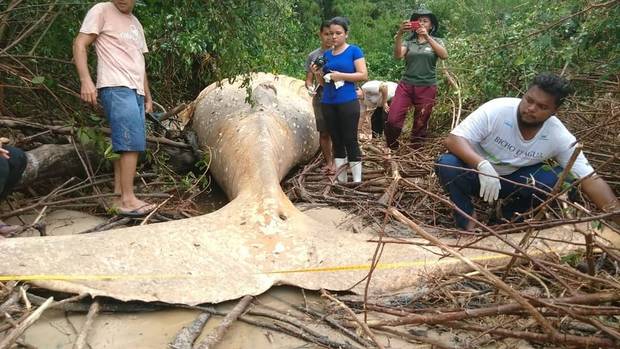 Scientists have been left baffled as to how a dead humpback whale ended up in the Amazon, miles away from its natural habitat.

Scientists rushed to find the carcass, estimated to be 11m long and 6m wide, after videos of a flock of vultures surrounding the decomposing mammal, appeared online.

The whale, believed to be a 12-month-old calf, was found at the island of Marajo in Brazil’s north, where the rainforest meets the ocean on Friday.

Authorities from the NGO Bicho D’agua said they were stumped as to how the whale ended up so far from its natural habitat in the winter season.

Remarkable images captured by the marine conservationist group show the dead whale lying in the middle of a swampy mangrove, some 15m from the ocean.

Sampled were taken by biologists before it deteriorated too severely in the hope the tests revealed how the whale ended up there.