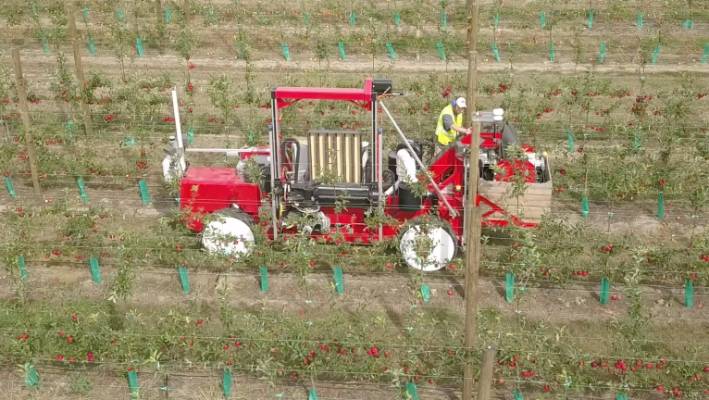 T&G Global is using trying out a robotic harvester for harvesting apples. It’s the culmination of four years’ work with US-based Abundant Robotics.

The robot could have major ramifications for New Zealand’s fruit-picking industry, which nearly every year in recent memory has experienced a seasonal labour shortage, to the dismay of growers.

Gary Wellwood, T&G’s global innovation manager, said  “We made a decision then that we could see there was a future in robotic harvesting.”

Wellwood said T&G representatives realised “this is going to happen”, and that every apple tree planted now would be visited by a robot “in some form” – whether that was a harvest robot, counting and sizing robot, or pruning robot.

“We understood that a robot can’t work in a fully three-dimensional tree [orchard], this is why we’ve gone to [two-dimensional].”

An orchard in Hawke’s Bay, specifically planted for the final iteration of the robot, is now fully operational.

Dan Steere, chief executive of Abundant Robotics, said it was the first time in the world the robot had been used commercially.

For more on this story, check out Stuff.co.nz