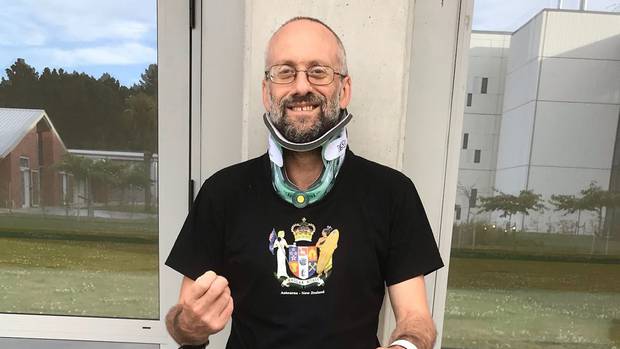 Motueka-based Ian Hunt, 55, became paralysed after fainting while “taking a leak” and falling off a South Island backcountry veranda in the middle of the night, sparking a dramatic rescue operation. He had long-time tramping mate Anthony Oakly, 60, who hiked 20km in the dark to raise the alarm, and the Nelson Marlborough Rescue Helicopter team to thank for essentially saving his life.

About 2.30am after a day of tramping, Hunt popped outside onto the veranda “to take a leak”, when he suddenly fainted.

“I have a medical condition called micturition syncope, which means I can faint sometimes when I urinate,” Hunt said.

“It hadn’t happened for a long time, and it definitely wasn’t the best time to happen while taking a leak off the veranda.”

While it was only about one metre high where he was, Hunt fell directly onto his head, knocking himself unconscious briefly and damaging his spinal cord, paralysing him.

“I could breath, but I couldn’t talk. It was several minutes before I could even groan.”

Oakly was inside, asleep at the time, but awoke soon after to “someone moaning outside”.

He found Hunt lying on his back in the tussock below the hut veranda, paralysed and barely conscious. Oakly, who volunteers with the Motueka Land Search and Rescue team and has extensive first aid training, assessed his mate as having a severe spinal injury and potential concussion.

But it was then he realised he had left his personal locator beacon at home.

“I always take it, but the battery was flat and I thought it was such an easy trip we wouldn’t need it,” Oakly said.

With no cell phone coverage, Oakly helped his mate become as comfortable as possible before setting off about 3am down the Severn Valley, crossing five rivers and navigating “angry cows” before reaching Molesworth Station Rd some 15km away.

With no vehicles nor houses to be seen, he set off for the station some 20km up the road.

Miraculously after about 5km a vehicle passed by and took him to the nearest Department of Conservation hut, where they were able to raise the alarm through a ranger at about 8am.

The Nelson Marlborough Rescue Helicopter reached Hunt at about 9.30am.

The rescue team took him straight to Christchurch Hospital, where he spent three days before being transferred to the spinal unit at Burwood Hospital.

He had a “hypertension injury” in his spinal cord, and it took him nearly two weeks of intensive physio and occupational therapy before he could walk again unsupported and be discharged.