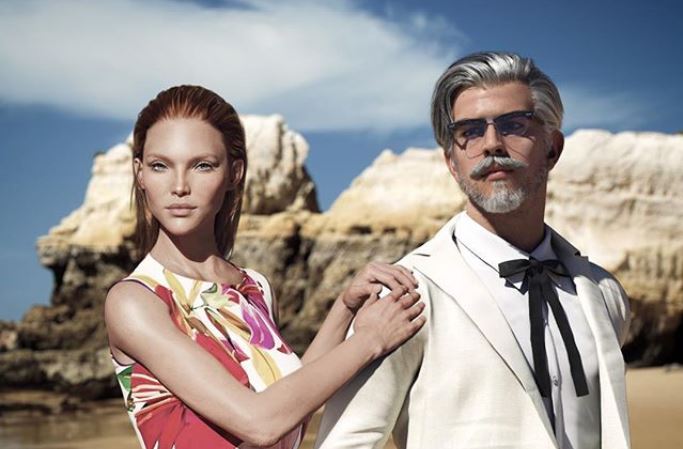 A millennial version of the Colonel has taken over the KFC Instagram, sporting wavy grey locks atop an almost wrinkle-free face. A Daddy Colonel if you will….

#ad On the eagle aka the big chicken aka my private jet. Just finished my taxes… And got a refund! Thanks to @turbotax 🙌 Tax day is coming up, so you better get on yours too. I used TurboTax Live  and so should you. Real CPAs and EAs help you with your taxes from basically anywhere. From the comfort of your couch or if you’re waiting for a private jet. Lol. They’ve got tax experts ready to answer all your tax questions. That got me and my media guy Brian thinking that we should do an AMA ‘cause I’ve got all this time on my hands now thanks to TurboTax Live. My AMA will kinda be like how TurboTax Live answered my questions about my taxes. But I can’t help you with taxes. I can just answer important questions about chicken and life. Being willing to take good advice from experts is part of the #secretrecipeforsuccess. #adultingwins #taxday #heresyourchance #ama #secretrecipeforsuccess #turbotax #taxes #friedchicken #friedchickentattoo #advice #success #entrepreneur #behindthecurtain #keys #jetlife #thebigchicken #respect #inspiration #positive #positivethoughts #artistatwork #brian #guru  #worktravel #workfromanywhere #influencerlife

The new Colonel’s moustache is finely manicured. He wears a barely buttoned white shirt, underneath an all white suit. He and his influencer friends visit picturesque deserts and pose in private planes. He appears to use an Apple laptop, which is presumably how he finds his inspirational quotes.

He is, of course, not real (though we kinda wish he was *wink wink*).

Check it out, fried chicken fam. Not only did I turn myself into a digital, computer-generated influencer, I also got some ink. The one and only @misterctoons gave me this amazing tattoo. I feel like I am both the canvas and inspiration for this beauty. Always try to inspire like I do when I’m making amazing fried chicken. Inspiration is part of my #secretrecipeforsuccess. Stay tuned to my IG to see more from my virtual life, and I’ll also be dropping some wisdom that I call the #secretrecipeforsuccess to help you achieve your dreams. #secretrecipeforsuccess #likeminded #friedchicken #friedchickentattoo  #entrepreneur #behindthecurtain #keys #respect #inspiration #positive #positivethoughts #artistatwork

The new Colonel pokes fun at influencer-culture. Rather than advertising fried chicken, KFC’s Instagram page has descended into a strange meta #ad state where ads for chicken are disguised as ads for tax refunds and Dr Pepper. Those #ads could in fact be ads for other products. Every post is three ads in one. Everything is a #ad.