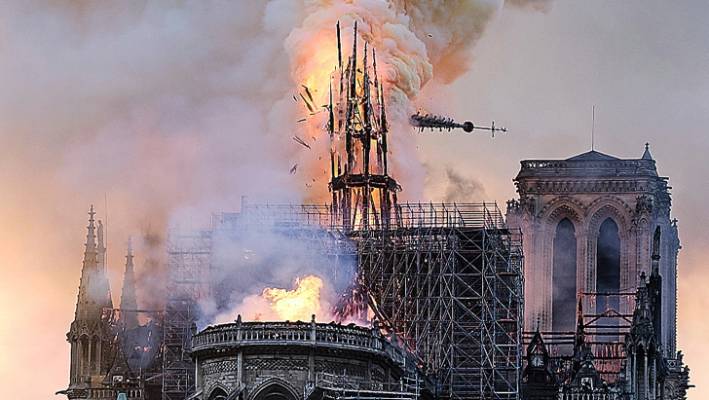 Firefighters have declared the structure of Notre Dame Cathedral saved after a massive fire gutted the roof and destroyed the spire. The 12th-century cathedral which is home to incalculable works of art and is one of the world’s most famous tourist attractions, immortalised by Victor Hugo’s 1831 novel The Hunchback of Notre Dame.

Some 400 firefighters battled the fire, aiming jets of water at the 850-year-old cathedral as solemn crowds watched quietly from behind police cordons.

The view from St Michele. As night falls, a group of people are singing while everyone else is taking photos and watch in shock. All feels eerie. #NotreDame #notredamedeparis pic.twitter.com/f5HAwGkmWN

French media reported that the fire may have been linked to renovation work on the roof and the spire, which dated from a 19th century restoration.

The Paris prosecutor’s office said that “as matters stand” it was investigating a count of “involuntary destruction by fire.”

The huge blaze destroyed the timber roof of the Gothic building and about two hours into the conflagration, the upper part of the 91-metre spire swayed and collapsed as flames shot up.

Newspapers Le Figaro and Le Parisien both quoted firefighters as saying the fire, which had raged for more than eight hours, had been brought under control and was partly extinguished.

French president Emmanuel Macron has vowed to rebuild Notre Dame after a catastrophic fire engulfed the upper reaches of Paris’ world-famous cathedral as it was undergoing renovations. French billionaire François-Henri Pinault has also pledged €100 million towards rebuilding Notre Dame according to Twitter Moments.